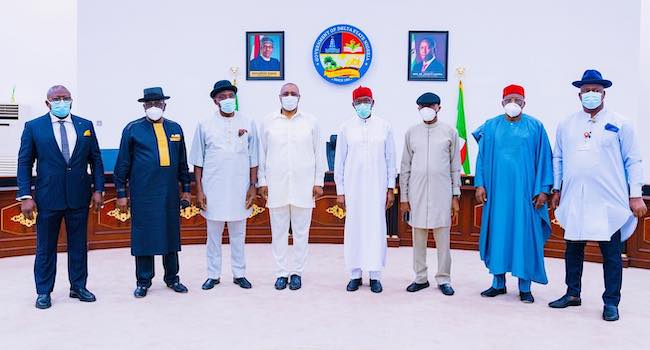 The Delta State, Ifeanyi Okowa, said on Wednesday Nigeria needs a new constitution to accommodate emerging issues on governance and the greater interest of Nigerians.

Okowa stated this when the Senate Sub-Committee on review of the 1999 Constitution visited him at the Government House, Asaba.

He said a new constitution for the country had become imperative in view of observed gaps in the 1999 Constitution.

The governor said: “There is no doubt that there is still a lot to work on in our constitution to have a near-perfect document, and I know that the National Assembly has continued over time to cause some of the amendments to be.

“But, I also wished that some persons from other zones actually had the opportunity to come down here to hear the voices of our people directly because sometimes we do not understand the extent of the pains that people of the Niger Delta truly suffer in our nation.

“We believe in one federation and in the unity of Nigeria. But we will continue to ask for very strong equity in our federation as a people and I know that the people will really voice out their opinion at the public hearing.

“We know that some amendments were made recently but on a general note, we are also aware that the constitution itself appears to have just been hurriedly put up just before the 1999 elections and handed over.”

Earlier, Senator James Manager, who led the committee to the Government House, said the team which comprised Senators from Edo, Bayelsa, and Delta were in the state to conduct a two-day public hearing on the amendment of the 1999 Constitution.

He added that aside from the Spiritual Books, the constitution was the most important book for any country.