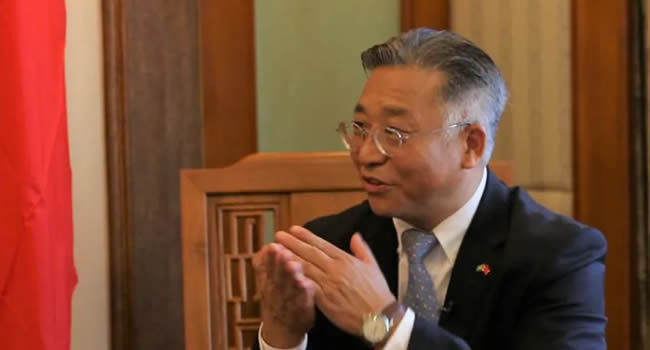 The People’s Republic of China has assured Nigerians that the country would not slip into a debt trap since its loans are mutually beneficial.

Mr Cui Jianchun, the People’s Republic of China’s Ambassador to Nigeria, gave this assurance on Thursday while responding to questions on the benefits of Chinese loans to Nigeria, at a seminar entitled “Learning from the Chinese Communist Party’s History and Creating a Brighter Future”, held in Abuja.

According to him though, it is only logical that when one lends money to a friend or business partner, one will also think of how to get the value of the money back.

He, however, expressed regret that some superpowers were painting a bad picture of China’s intentions.

“Some politicians have tried to use the new colonial system mindset to say that, ok, if I lend you money, if you cannot pay me back, you will lose your sovereignty

“But I want to let you know that the logic is that first, China loves to do something for Nigeria, not only to help, but it is also beneficial to the two countries.

“For example, the Chinese side can work with Nigeria for the railway station because now, money is a big constraint, just like in 1978, we had no money.

“But I do believe that now, at this critical time, we need the money to develop this country. We cannot wait for five years, ten years later.

“Sometimes, when we were planting trees for the next generation, some people said we were borrowing money to let the future generation bear the burden.

“Now, this is not true. Every country has to do something for the next generation, otherwise, the country cannot move forward,” Juanchun said.