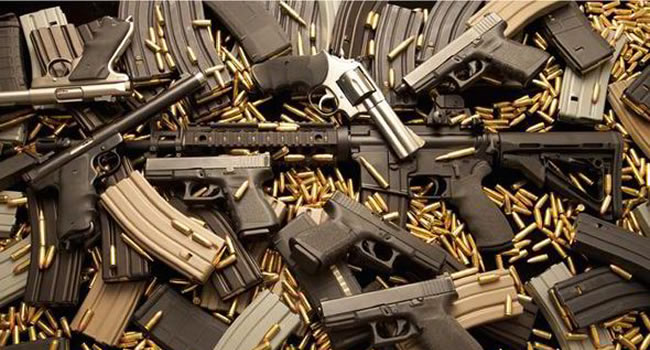 As the country’s insecurity situation worsens, the Nigerian government is spending more on importing arms and ammunition.

This is according to data from the National Bureau of Statistics‘ (NBS) 2021 first-quarter foreign trade report, published on Saturday.

The report noted that between January and March of this year, a massive N73.7 billion in ammunition was imported into the country, representing a 27.3 percent increase from N57.3 billion the total amount spent in the whole year of 2020.

The Bureau also said the first quarter spend is a whopping 497,723 percent increase over the N14.8 million spent during the same time in 2018.

Upon assuming office in 2015, President Muhammadu Buhari had announced plans to enhance local manufacture of firearms for Nigeria’s military forces in order to reduce the country’s reliance on imported arms and ammunition,

President Buhari was quoted at instructing the Ministry of Defence to draft clear and quantifiable plans for the construction of a small military-industrial complex for Nigeria.

“We must develop feasible methods for near-self-sufficiency in military equipment and logistical manufacturing, supplemented solely by extremely advanced foreign technologies,” the president had stated.

While Ripples Nigeria cannot confirm the status of the planned local manufacturing, increase in the importation of arms can be attributed to the growing level of insecurity in the the country.

From banditry to kidnapping, Boko Haram, and the recent increase in attacks on government facilities which includes the Nigerian police.

A report by the Global Terrorism Index (GTI) in November last year described Nigeria as the third most terrorised country in the world.

In fact, an analysis of data from the Council on Foreign Relations (CFR), in its Nigeria Security Tracker (NST) showed that since 2011 over 40,000 deaths have been recorded in the country from violence and terrorism.

According to CFR, the deaths were tracked from reports based on weekly surveys of Nigerian and international media.

CFR however noted that NST statistics should be viewed as indicative rather than definitive on the impact of violence in the country.

TB Joshua impacted lives of millions across the world – Jonathan