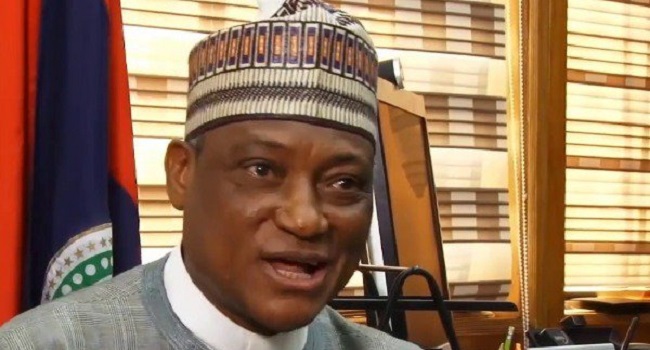 The Minister of Defence, Mansur Dan-Ali, on Tuesday said that Nigeria is still threatened by several security challenges.

Mansur stated this at the graduation ceremony of 18 participants of Course 4 of the Nigerian Air Force (NAF) Air War College in Makurdi, Benue State capital.

He was represented at the event by the Chief of Defence Staff, Major-General Abayomi Gabriel Olonisakin.

Nigeria has continued to battle with heightened security challenges in recent times including Boko Haram terrorists in North East, armed bandits in North West, killings by armed Fulani herdsmen in North Central and other parts of the country as well as kidnappings and other criminal activities across Nigeria.

In spite of all these, the Minister of Culture and Information, Lai Mohammed, had claimed that President Muhammadu Buhari’s government has performed well in addressing insecurity and that the “country is safer than it was in 2015.”

However, speaking on Tuesday, Mansur said, “As you are all aware, our nation remains threatened by several security challenges. The Armed Forces has performed creditably to address these challenges. Air power being a critical component of our military instrument of national power has remained a formidable force in the preservation of the nation’s territorial integrity.

READ ALSO: Buhari has sent corruption under the carpet, Nigeria now safer than in 2015 – Minister Lai

“The changing character of warfare infers that for a military force to achieve and maintain the competitive advantage it seeks over its adversaries, it must stay adaptive in the methods and thinking that guides its operations. At the heart of attaining competitive advantage, is the ability to be flexible in applying the diversity of thoughts that permeate war and warfare.”

In his remarks, Chief of Air Staff, Air Marshal, Sadique Abubakar, said the military power remained a critical requirement for preserving the sovereignty of a nation.