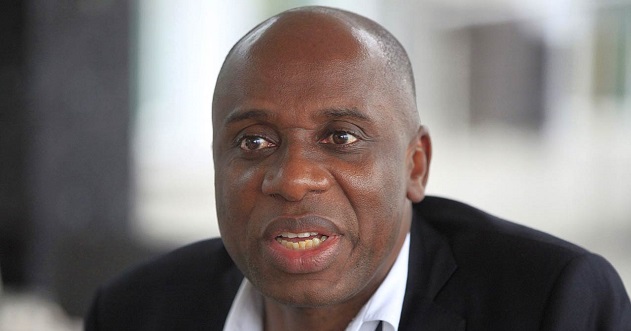 The Minister of Transportation, Rotimi Amaechi, said on Saturday the Federal Government had the capability to repay loans obtained from the Chinese government within the stipulated period of 20 years.

In a statement issued in Abuja, the minister said China was the only country in the world giving out loans with a low interest rate of 2.8 percent.

He said no country in the world would give out a loan without a guarantee to pay back such loans.

Amaechi said: “The trade agreement between Nigeria and China, the ministry of transportation does not take a loan, everything about the loan is directed to the Ministry of Finance, so, I couldn’t have signed any loan because I don’t take loan.

“What I signed is what is called a commercial contract, which is a contract between the Federal Government and Chinese Civil Engineering and Construction Company (CCECC) as a contractor. The contract between Nigeria and China is usually signed by the ministry of finance.

READ ALSO: CHINESE LOANS: ‘There’s no contract without an agreement’, I’m ‘ashamed’ of the reactions —Amaechi

“There must be an agreement and such agreement must contain some terms, that doesn’t mean that you are signing away the sovereignty of the country, no country will sign out its sovereignty.

“What clause 8 says is, I expect you to pay according to those terms we have agreed. If you don’t pay, don’t throw your immunity on me when I come to collect back the guarantee that was put forward, that is all.

“We are paying the loans. In the same National Assembly sitting, they were told that out of the $500million loan, we have paid $96 million already, Nigeria is already paying.

“And the $500 million was not taken by us, it was taken by ex-President Goodluck Jonathan in his term and that clause was there.

“Nigeria has the capacity to pay back for the period of 20 years at 2.8 percent, which country will give you that loan? Secondly, these loans are not given to us, they are paid directly to the contractors.

“Once they sign that the job has been done, they pay the contractors and that has never happened before and these projects are in place. Are they trying to rubbish the fact that there is a railway from Abuja-Kaduna?

“There is no loan in Nigeria, either internal or external that is not approved by the National Assembly, none.