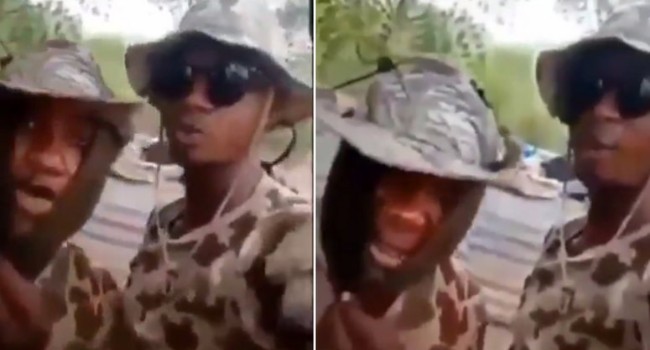 The Nigerian Army said it had arrested two soldiers who vowed to rape, and infect Warri women with HIV.

The Army said the soldiers were arrested at 9 Brigade, Ikeja Military Cantonment, Lagos State, on Friday.

While making this known via a statement on its official twitter handle, the army further added that further investigation was ongoing.

A soldier had on Thursday in Ugbuwangue community in Warri, Delta State allegedly killed a youth leader, Joseph Pessu for supposedly not complying with the stay at home order of the state government.

The youths of the area in retaliation, were alleged to have attacked two soldiers.

Responding in a viral video, the now arrested soldiers vowed they would ensure they rape Warri women both married and unmarried infecting them with HIV.

The video generated a lot of condemnation from the Nigerian public.

However, in its statement, the army said: “Soldiers in a viral video using uncouth and uncivilised language purportedly threatening to molest women in Warri, Delta State, were arrested at 9 Brigade, Ikeja Military Cantonment, Lagos State, today 3 April, 2020 and further investigation is ongoing. The general public should be assured that the investigations will be swift and fair in accordance with applicable military laws.

“The outcome of the investigations will determine the most appropriate disciplinary measures that can be taken in the circumstances. The Nigerian Army wishes to reiterate that it would not tolerate any form of irresponsibility and indiscipline on the part of any of its personnel.”

The Ifeanyi Okowa-led government of Delta State has since said that the video of residents defying the stay-at-home order over the coronavirus pandemic and confronting security operatives was concocted and therefore fake.