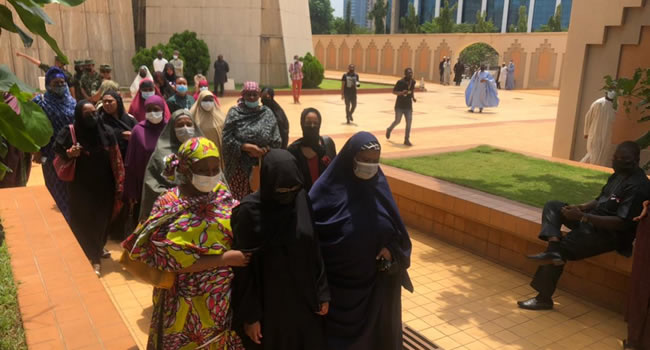 The Nigerian Army, on Saturday laid to rest, the late Chief of Army Staff (COAS), Ibrahim Attahiru, and six other senior officers in Abuja.

The late COAS, alongside other senior officers, died in an air crash on Friday, while on an official trip in Kaduna State.

Although the military has released statements on the crash, neither the Airforce nor the Army has given full details of the occupants of the ill-fated aircraft.

Attahiru, born in Kaduna on August 10, 1966, was a major general before his appointment by President Muhammadu Buhari as COAS in January 2021, after the sack of Tukur Buratai, a lieutenant general.

Also, senior officers arrived the national mosque ahead of the funeral prayers, which was earlier slated for 10 am but later moved to 12.30 pm.

Before his appointment, the late army major, was the General Officer Commanding 82 Division of the Nigerian Army, Enugu and was at a time the Theatre Commander of the Operation Lafiya Dole until 2017 when he was redeployed.

He barely spent four months in his new role before the shocking news of his sudden demise.

Meanwhile, the venue for the Church Service was changed from National Christian Centre to Nigerian Airforce Protestant Church, Bill Clinton Drive Airport Road in Abuja, while the arrangement for the National Mosque remained the same.

The internment took place at the National Military Cemetery, Abuja, as the time for the final interment prayer was shifted from 10 am to 12:30 pm.

Guests were still trooping into the premises of the National Mosque, as the Wife of the late Army Chief, Fatima Attahiru, arrived the National mosque, flanked by friends and relatives.

Meanwhile, Army spokesperson, Mohammed Yerima, in a statement on Saturday morning, said both the mosque and church services would hold simultaneously.

Related Topics:AttahiruburialCOASNigeriaplane crash
Up Next

Navy cancels 65th anniversary celebrations over death of COAS, others