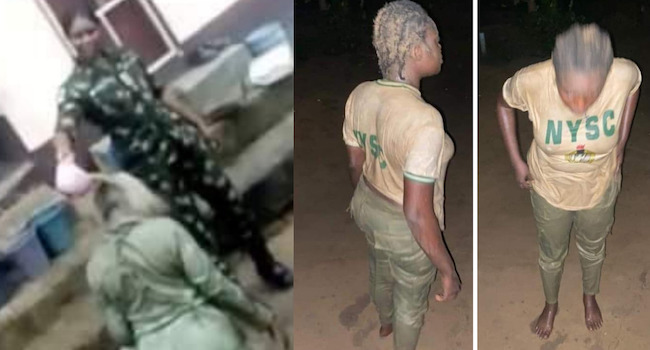 The Nigerian Army on Friday described as gross misconduct, the alleged assault of a member of the National Youth Service Corps (NYSC) by one of its personnel in Calabar, Cross River State.

In a video that surfaced on social media earlier on Friday, an army officer, Lt. Chika Anele, was seen pouring dirty water scooped from a bucket on the corps member, Ifenyinwa Ezeiruaku, at the 13 Brigade headquarters in Calabar.

Anele was also seen hitting the corps member, who knelt down with uniform, on the head with the back of the bowl.

The Director of Army Public Relations, Brig. Gen. Onyema Nwachukwu, who reacted to the incident in a statement in Abuja, said the army officer would undergo regimental trial in line with the extant provisions of the Armed Forces Act.

Nwachukwu said: “The Nigerian Army has taken cognizance of a video clip currently making the rounds on social media, where a female officer was seen dehumanising a member of the National Youth Service Corps in Calabar, Cross River State. This act is not only condemnable but unprofessional and against established precepts of discipline in the Nigerian Army.

“The Nigerian Army, therefore, condemns in strong terms, this act of gross misconduct. Undoubtedly, the officer’s actions have caused the Nigerian Army monumental embarrassment and it’s highly regrettable. This unfortunate act of indiscipline does not in any way represent the Nigerian Army and will not be condoned in its entirety.

“For the records, the ugly incident happened in 13 Brigade, Calabar. The brigade commander immediately instituted an investigation and the officer involved has been identified and sanctioned in the interim and would be made to undergo regimental orders (trial) in line with the extant provisions of the Armed Forces Act.”

The army spokesman also dismissed the insinuation that the Brigade headquarters tried to cover up the incident.

He, however, asked the victim, her family, friends, the NYSC, and Nigerians to forgive the Nigerian Army over the incident.