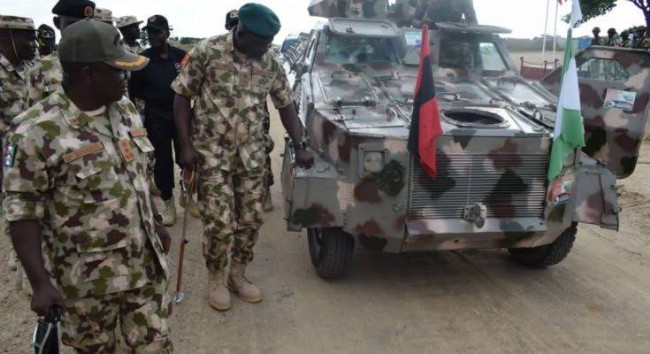 The Theater Commander of the North-East Joint Task Force, Operation Hadin Kai of the Nigerian Army, Maj. Gen. Christopher Musa, claims that the military has successfully reclaimed around 60,300 communities from the grips of the Boko Haram and ISWAP terrorists.

Musa made the assertion at an award ceremony in Abuja on Saturday, to decorate officers and soldiers who have distinguished themselves in the war against insurgency in the country, as well as journalists who give positive reportage on the activities of the military campaign.

In a statement by Musa and made available to Ripples Nigeria on Sunday, the Theater Commander said the decorated soldiers and officers
had “distinguished themselves and demonstrated exceptional bravery, dedication and commitment in the fight against Boko Haram insurgents.”

He said the journalists on the award list also “demonstrated critical roles in their reportage towards the fight against terrorism in the region.”

“We as people of Operation Hadin Kai who are building this nation together where peace and justice reigns, saddled our fatherland with love, strength and faith bounded by freedom and unity shall continue to conquer.

“Operation Hadin Kai is a joint Operation which is designed for every one of us to play a role in ending all forms of insecurity in the North East. It consist of military, para-military, government and non-governmental organisations, the civil populace and the law abiding citizens.

“The Operation was established in order to restore law and order, extinguished all flames and end all forms of terrorism and criminality in North Eastern Nigeria by kinetic and most importantly non-kinetic operations.

“In the fight against terrorism, the Nigerian Army has been able to reclaim over 60,300 communities and captives were liberated and rescued from the forest and Lake Chad region.

“The military have conducted series of operations in Sambisa Forest, Tumbuktu triangle and Mandara Mountains in protecting people’s lives and property.”

Gen. Musa also called on the remnants of Boko Haram terrorists to come out from their hideouts and embrace the amnesty programme of the federal government, which is aimed at rehabilitation and reintegration of repentant terrorists back into society.

Man stabs rival to death over girlfriend in Adamawa