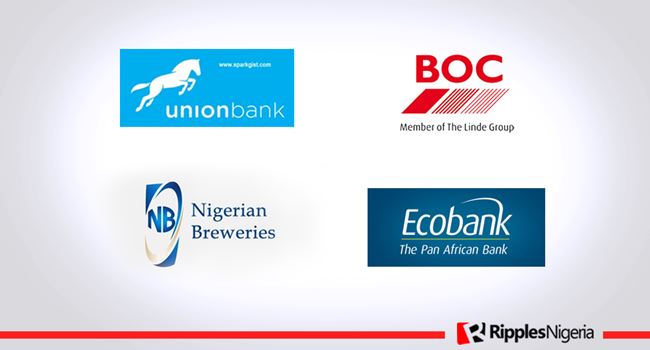 The Nigerian Stock Exchange was mostly bearish last week, as investors across several companies engaged in a sell-off to protect their profit, while others dumped shares to cut losses on their investment.

Nigeria’s capital market had opened trading for the week, Friday, with a market capitalisation of N22.1 trillion, but sell-off among investors dragged the market’s valuation down to N21.8 trillion.

This also affected the total market share value which ended trading for the week at 41,709.90 All Share Index, 548 basis points below the 42,257.90 ASI the capital market opened on Monday.

Amid the bearish performance of the capital market, some companies caught the attention of Ripples Nigeria through their off-capital market activities and their stock performance, and have been listed as stocks to watch for the week.

The alcoholic company is at loggerheads with Ondo State government over haulage fee. The disagreement led to a shutdown of Nigerian Breweries’ depot by the state government for four days.

The depot was opened on February 2, but that didn’t end the worries of Nigerian Breweries, as a court in Ondo State ordered the company to pay N169 million to the state. Although the company has appealed the order, that didn’t stop investors from dumping its shares, as the fee could affect the company’s earnings.

This has affected the price share of the company, falling to N61, from the N63 it opened with on February 1. Investors confidence is not high on Nigerian Breweries as the face-off with Ondo State government is still hanging over the company.

Since Ecobank announced its financials for 2020 full year, the company’s share price has been on a decline. Ecobank revenue for last year nosedived, and this didn’t boost existing investors confidence.

Investors dumped Ecobank shares, leading to the share price dropping from the week’s opening of N6.75kobo on February 1, to N6 at the close of market on February 5.

Also, the company is looking to raise $300 million at the London Stock Exchange (LSE). The debt will impact on the lenders balance sheet, so investors need to watch out before engaging the shares of Ecobank.

Out of four days of trading, Union Bank of Nigeria (UBN) had the highest trade volume, a signal that showed investors were actively after Union Bank shares since the start of trading this week.

BOCGAS made this list following its crash in the capital market this week after a high ride among investors in January. Since the company announced TY Holdings will purchase shares of BOCGAS UK last year November, the company’s share price has been on the rise.

However, since trade started in February, investors seem to be dumping BOCGAS shares, as report of the acquisition wear off on existing investors who are selling off their shares to protect their profit having watched their share price grow from over N3 per share to as much as N15.12kobo within three months.

The profit-taking among investors led to BOCGAS share price crashing to N13.61kobo in the first week of trading in February.

Ripples Nigeria Stocks Watchlist is a selection of stocks monitored for viable trading or investing opportunities. An investor may casually generate a list of equities for investment purposes. But we have taken the pain to do that based on certain parameters in order to save you that hassle.

Kindly note that Ripples Nigeria Stocks Watchlist is not a buy, sell or hold recommendation. It is advisable to consult your financial advisor before making any investment decision.

Residents, police disagree over who killed man on his farm in Ogun