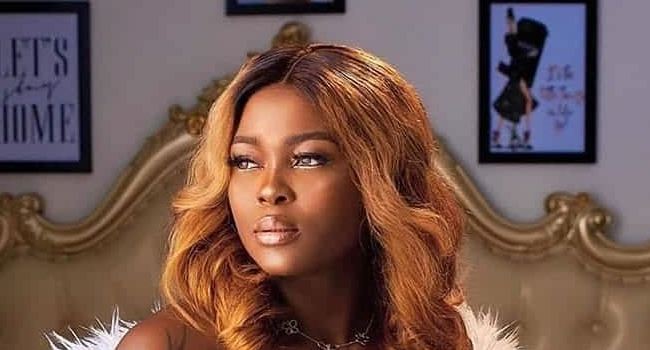 Former Big Brother Naija contestant, Ka3na has come under intense scrutiny following her snide remarks towards a fan who inked her name on her thigh.

Ka3na rebuked the fan for getting a tattoo of her and for also recognizing her as a role model.

Ka3na revealed she was not in support of the gesture.

Here is what Ka3na stated;

‘How can you do something like this to your own body?

If you love me and you are my fan, there are ways you can actually show that by always posting my pictures, always on my comment section, always attending my events, seeing me and taking pictures with me.

Not tattooing my name on your body.

Celebrities that encourage these fans need to stop.” she said.

Since she made the comment on social media, several notable Nigerians have dragged her online.

First, the popular transvestite, Bobrisky made a comment about her reaction to the fan’s gesture.

To those saying I am encouraging those who tattoo my name by giving them money is wrong.

Read also: Five celebrities who have cheated death in 2021

We all know is not all that glitters on IG that is real gold,” he wrote.
The crossdresser continued;

“Firstly is my money, I can give it to anyone I like.

What about those ones I have helped without my picture tattoo on their body?

You were blind to talk then.

“You went on Twitter and you wrote something that you would have loved someone to have a tattoo of you on their body and this young lady did. You came, did a video and you were all flirting with your hair and you were being sarcastic and that was very wicked of you,” she said.

“My point exactly is simple. You don’t know that a lot of people look up to us. Some people can crazily love you to a very destructive point. You encouraged her. She tattoed you and at the end of the day you came and you said it was wrong.”

Other notable celebrities such as Kelly Handsome, Big Brother Naija finalist, T-Boss have also taken to Instagram to slam the reality star for her comments.