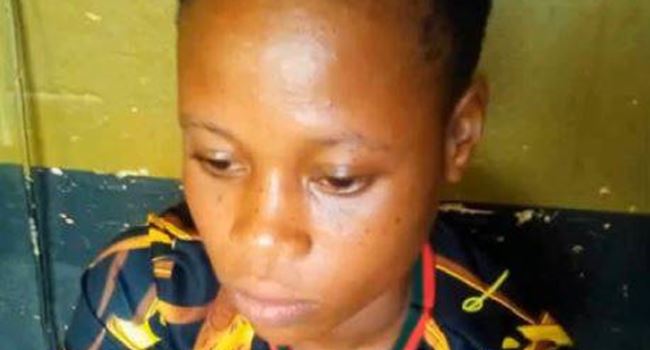 A 17-year-old Nigerian girl who was trafficked to Mali for prostitution has cried out for help, begging to be returned home after she became stranded in the West African country.

Another Nigerian based in that country posted a video of the girl on Monday and while narrating her ordeal, said she was taken to Mali alongside four other girls by a woman she referred to as ‘Aunty,’ with the promise of securing employment for them.

However, when they got to Mali, she realized that the woman had taken them to the country with the intention of turning them into prostitutes.

In the viral video, the girl who said she is from Abraka in Delta State, said when she refused to work as a commercial sex worker, the woman abandoned her to fend for herself in a foreign land where she knew nobody.

The young man was heard pleading for help for the young girl to find her way back to Nigeria.

“I saw a small Nigerian girl at a bar. She told me a woman brought her and four other girls from Nigeria to Mali. She said the woman told them they were coming to Mali to work but when they got to Mali, she took them to Ashawo (prostitute) quarters, urging them to work as prostitutes, so they can get money to feed themselves.

“This particular girl said she can’t sleep with men to make money, then the woman brought the girl to a car park in another state, dropped her there and left.

“A guy took the girl from the park to another Ashawo quarters. Many of them are here as prostitutes but this girl in particular is not agreeing to it. The owner of the hotel is asking her to leave because she is not paying the house rent though she is really in charge of the bar.

“She said she is from Delta State/ I want you people to go to that place and speak with the girl, she said she wants to go back to Nigeria. She is always crying; she gave me her parents address, that I should help her locate her parents.

“She said she is from Abraka in Delta State. I can’t bring her to my house without first meeting the police. She doesn’t have anything, she doesn’t have money. I pity her, please help her.”

Policeman dies after beating by DSS operatives in Osogbo