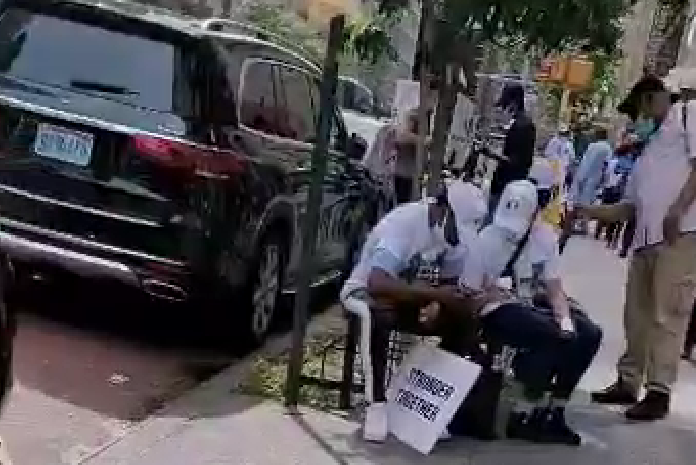 The Federal Government has allegedly hired counter protesters in defence of President Muhammadu Buhari and his government at the ongoing United Nations General Assembly (UNGA).

This allegations was based on a video filmed by an unknown man who called himself “a Biafran” interviewing some of the counter protesters in New York City.

Ripples Nigeria had reported that one of the groups protesting against the policies of President Buhari are the Yoruba Nation and Biafra agitators, Nigerian Indigenous Nationalities Alliance for Self-Determination (NINAS) which is headed by Prof Banji Akintoye.

Akintoye had accused the Nigerian govt of renting Americans for a counter protest at the cost of $500 per person.

READ ALSO: Buhari off to New York for UNGA76

In a seeming confirmation of Akintoye’s accusation in the video seen by Ripples Nigeria on Friday, the unnamed African-American from the Bronx confirmed the claims saying, “I can protest on behalf of blacks and anyone. I was paid to protests. I don’t know what the information is about or what I am protesting about. It is not just about being paid. All I was told is that they needed me for this. We are from the Bronx and someone approached us for it.”

The NINAS’ protest tagged, ‘Million-Man Freedom March,’ was to show the world “the crimes against humanity, attacks on press freedom, free speech and other criminalities being aided by the Buhari-led government of Nigeria,” Akintoye explained.

The Federal Government is yet to issue an official statement regarding these claims.