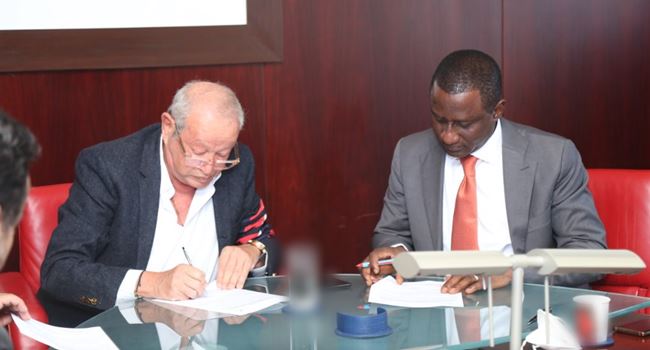 Nigeria has brokered a deal with La Mancha Resources Inc., a Luxembourg-incorporated private gold developer and miner, to produce the metal on a commercial scale in Nigeria.

The Nigerian government announced via a post on Saturday through its Twitter handle –  @NigeriaGov – that Minister of State for Mining Uchechukwu Sampson Ogah – endorsed the expression of interest agreement on behalf of government.

The Egyptian African Arab Company for Development coordinated the pact in Cairo, with Naguib Sawiris, chair of La Mancha, signing for the company.

Foreign and domestic investors are accelerating bids to tap into Nigeria’s newly rejuvenated commercial gold mining, which government hopes will bring in $500 million in revenue as its seeks to diversify from oil, its chief source of revenue and biggest foreign exchange earner.

Canada-based Thor Explorations Limited, which wants to plough in $98 million to Segilola mine, Nigeria’s first industrial gold project, is on the exploration line-up for next year.

In October, government said it was working out a collaboration with the United Nations Industrial Development Organisation (UNIDO) and the Miners Association of Nigeria that would lift mercury-free gold production in Nigeria.

But it would need to forge a robust surveillance mechanism to clamp down on illegal miners and run a truly effective campaign against illicit gold mining and smuggling, which has cost Africa’s biggest economy $3 billion in 7 years.

The signing of the deal between Nigeria and La Mancha marked the company’s readiness to begin exploration in the country in earnest, Sawiris said at the ceremony.

“Our ultimate goal is to attract investors with the technical and financial competence to invest in our solid minerals sector, from detailed exploration to mining, development, processing and refining to producing standard ores in Nigeria,” said Ogah.