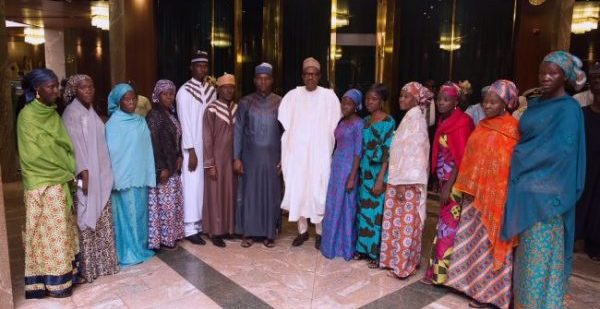 The Director-General of the Department of State Service (DSS), Lawal Daura, has given more details of what it cost the Nigerian government to secure the release of three university lecturers and ten police officers’ wives from the Boko Haram sect.

The police officers were kidnapped in June 2017 while travelling from Maiduguri, to Askira Uba local government area of Borno State to attend a burial.

The lecturers on their part, were members of a team of geophysicists searching for oil in the Lake Chad Basin, on behalf of the Nigerian National Petroleum Corporation (NNPC) when they were snatched by the terrorist group.

Buhari received both groups on Monday, after their release on February 10.

READ ALSO : We’ll go to any length to rescue Dapchi schoolgirls, others —Buhari

Speaking at the reception held in Aso Villa, Abuja, Daura gave a narrative of how the government was able to secure their release from the group.

He said, “Mr. President, the search and negotiations for the rescue of the victims commenced in earnest following your directives to the effect that all abducted persons must be found and rescued alive.

“However, we chose the path of negotiation because it was considered as the safest because any forceful attempt to rescue the victims could endanger their lives.

“These negotiations took several months and the Department of State Services with support of the external elements of the group in diaspora and support from friendly countries and liaising with International Committee of the Red Cross, made the rescue possible,” he said.

“In addition, the negotiations took place mostly outside the country, though subsequently finalised in the theatre of operations.

“The negotiations were mainly centered on an attempt at conflict mitigation which include the fate of arrested members of the insurgent groups especially, accepting to free by government those found not to be culpable in any criminal action.

“Also, possible cessation of hostilities especially the attacks with IEDs on innocent civilians, worship centres, schools and other public places in return for temporary stoppage of air strikes by helicopter gunships.

“Lastly, the negotiation was also centered on the possibility of granting amnesty to those willing to surrender and ready to lay down their arms by the federal government,” he said.

One of the lecturers, Solomon Yusuf, who spoke on behalf of the released abductees, said, “While we were in captivity and we said with 180 million or more Nigerians, will Nigeria ever come to rescue us? We lost hope! Sir, you surprised us. After seven months for us in the university and eight months for the 10 ladies, Nigeria rescued us. This shows that the life of every Nigerian is important and is worth rescuing.

“Sir, we are grateful. You gave us hope when there was no hope And we are excited, we thank you Sir, he said.