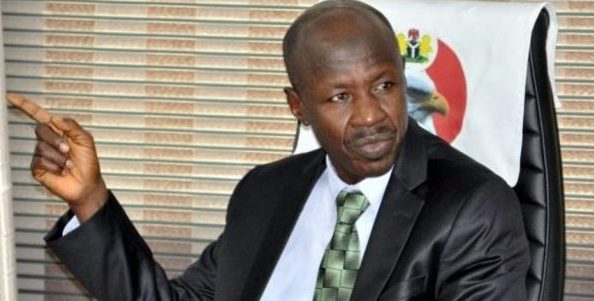 The acting chairman of the Economic and Financial Crimes Commission (EFCC), Ibrahim Magu, may be in for it as the Federal Government has gave him till Tuesday to explain why he re-filed corruption charges against the chairman of the Code of Conduct Tribunal (CCT), Danladi Umar.

In a query dated February 16 and signed by the Solicitor General of the Federation, Mr. Dayo Apata, which was made available to newsmen in Abuja on Monday, Magu was asked to answer his alleged underhanded plan to prosecute the CCT boss.

The AGF had also written to Mr. Festus Keyamo (SAN), who is prosecuting the case against Umar to confirm who hired and authorized him to prosecute the case.

Apata, insisted that Magu had up to February 20 to advance his response to the Attorney-General of the Federation (AGF), Mr. Malami Abubakar, to state what informed the re-filing of corruption charges against the tribunal chairman after he had been absolved of any wrongdoing by the same body.

It read, “The attention of the AGF and minister of justice was drawn to news report that the EFCC has filed corruption charges against Justice Danladi Umar, before the FCT High Court.

“I am directed by the minister to seek clarification from you as to whether the charges were filed on your instruction or directive and if in the affirmative, what is the compelling basis for doing so. This clarification becomes imperative in view of some background facts”, Apata said.

He cited some of the background facts to include the March 5, 2015 report of the commission’s investigation which described as “mere suspicion” the corruption allegation leveled against Umar.

Apata went further to say that the EFCC report had claimed that the allegations were not sufficient to successfully prosecute Umar among others.

“The commission’s position in paragraph 2(a) was also maintained and sustained by the Honourable Attorney General of the Federation while appearing before the House of Representatives’ Investigative Committee sometimes in 2015.

“In view of the foregoing, the Honourable Attorney General of the Federation requests for your prompt briefing as to the existence of new facts which are contrary to the position in your attached investigation report.
“Kindly accord this letter top priority while your prompt response within 48 hours from the receipt of same is required in the circumstances”, he said.

Under Buhari, Nigeria ‘is coming to an end’- PDP