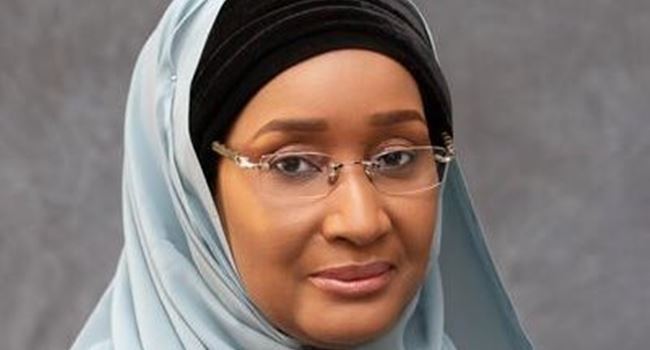 The Minister of Humanitarian Affairs, Disaster Management and Social Development, Sadiya Farouq has revealed that the aim of the Alternate School Programme (ASP) is to take education to the doorsteps of children.

Farouq made this disclosure during a news briefing shortly after the inaugural meeting of the Presidential Steering Committee on the Programme on Monday in Abuja.

She said that the main objective was to take the school to where these children were, stressing that government in the past had tried other programmes that did not work.

According to her, the Federal Government felt that ASP will help in educating these children that are not engaged in any form of an education programme.

“This is our first inaugural meeting and we have come up with sub-committee that will work to implement the programme.

“We have also constituted a Technical Working Group that will develop the SOP in the implementation of the programme.

“We are collaborating with the Ministry of Education, but my ministry will play the role of an interventionist.

“We are going to intervene using our Social Intervention Programme to see that these children are captured,” Farouq said.

In her opening remarks before the commencement of the inaugural meeting of the committee, Farouq had called for cooperation, coordination and commitment by members.

Speaking, the Minister of State for Education, Mr Chukwuemeka Nwajiuba, said that President Muhammadu Buhari had directed the committee to draw up a scheme to reach children and persons otherwise who did not engage in any form of formal education.

Nwajiuba told newsmen that the strategy for the programme was to take knowledge to the students and engage them sufficiently to become participants in the global economy.

“There is the need to identify where they are and go as an outreach to them and that is where we are at this point,” he said.

Nwajiuba noted that there is Commission for Mass Literacy, Adult Education and Nomadic Education, adding that all of them were doing their best.

“In spite of all these commissions, there are people who are still not engaged in any form of education and that has led to humanitarian crises.

“So, it is no longer a formal education issue, but addressing a humanitarian problem that had arisen as a result of the gaps those ones were not able to meet,” he said.

According to him, that is why a committee was set up to identify the figures and where they live around the country and focus on what needs to be done to address this because the challenges vary.

“It is not a one size fit all. There is no uniform programme, but there is uniform identification and then the curriculum will be delivered to them using different methodologies.

“Some by a direct approach, some by technology, depending on what it is in the gaps in those areas,” Nwajiuba said.

Ripples Nigeria had reported in January that President Buhari inaugurated an 18-man Presidential Steering Committee on ASP with Farouq as the Chairman.

Members of the committee included Minister of Education, Alhaji Adamu Adamu as Co-Chairman; Minister of State of Education-Member; Permanent Secretary, Ministry of Humanitarian Affairs, Alhaji Bashir Alkali, as the Secretary.