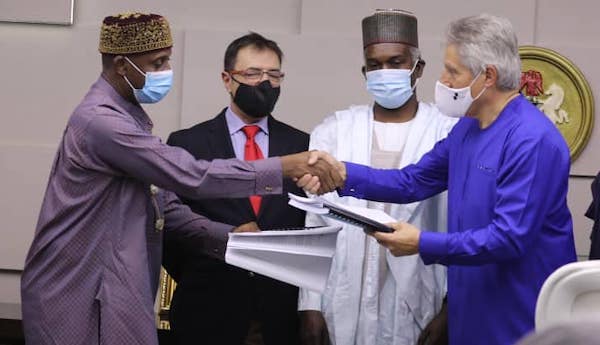 The Federal Government has signed the Memorandum of Understanding (MoU) with Mota- Engil Group for the construction of $1.959 billion Kano-Maradi Standard Gauge rail project.

The Minister of Transportation, Rotimi Amaechi, who disclosed this in a statement by the Director Press and Public Relations in the ministry, Eric Ojiekwe, on Monday, said the project was aimed at linking the whole country by rail.

Also at the event were the Permanent Secretary in the ministry, Dr. Magdalene Ajani, the ministry’s Director of Legal Services, Pius Oteh, and Head of Legal, Mota- Engil Group, Cameron Beverley.

Others were the Magajin Garin Kano, Muhammad Wada, Director of Mota-Engil Group, Kola Abdulkarim and the company’s Vice President, Mohammed Abdul-Razaq, among others.

The minister said the rail project would run from northern Nigeria through Kano, Jigawa and Katsina and to Maradi in the Niger Republic.

According to him, the 283.750 kilometres rail line would help develop freight and passenger transport along the corridor.

The project is expected to be completed in 36 months.