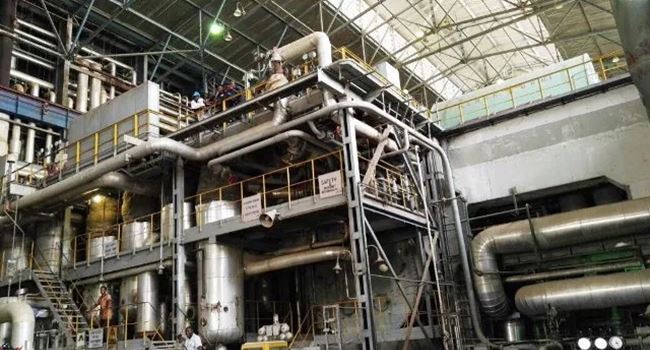 The Nigerian Government Wednesday said it had signed a deal with Sealink Promotional Company Limited for transportation of solid minerals on  waterways through the jetty landing port of Ajaokuta Steel Company Limited.

Nigeria’s biggest industrial project has been at the mercy of cyclical delays from inception in 1967 when a posse of Russian miners landed in the country to prospect for iron-ore somewhere around mineral-rich Middle Belt.

Moments of foot-dragging, approval delays, failed privatisation and several backs and forths  had beset the project all through its 53 years until rescue came its way in October when government opted for a Build Operate and Transfer arrangement with the Russian government, the concessionaire, which will deliver the project.

So far, the Nigerian government has invested $6 billion in the venture while it plans to commit a further $1.46 billion through a funding support from Afreximbank.

The jetty landing port contract, whose Memorandum of Understanding was signed on Wednesday, is a tripartite agreement involving the Ministry of Mines and Steel Development, Nexim Bank and Sealink, a statement issued in Abuja said.

“Actually a giant stride for the country, especially in terms of commerce and logistics in Nigeria. This one has been long in coming, our mode of transportation in Nigeria has most been essentially by road, especially when you are transporting bulky materials and this has led to often times damage to the road.

“Ajaokuta is coming in because they will be using the jetty in Ajaokuta as a landing base for most of these goods they will be moving up and down,” said Olamilekan Olagoke, the Minister of Mines and Steel Development.

Abba Bello, Managing Director, NEXIM Bank, believes Sealink will bridge the trade facilitation gap in Nigeria’s solid minerals trade with its West African neighbours given that no vessels exist at the moment to stimulate seamless commercial dealings between them.

“Also when it comes to taking imports inland Sealink is going to do that and it is also facilitating trade within the region. Imagine you have 1 million tonnes of iron ore you want to evacuate from Itakpe you need 35, 000 trailers to get it out, with a batch you can bring it out. So these are the possibilities and opportunities we are seeing. It is largely a private sector driven initiative.

“One of the things lacking is efficient transportation as the Minister said that as a country we have solely relied on on-road transportation. In most economies where trade is well-grounded, there is multi-modal trade facilitation,” Bello said.