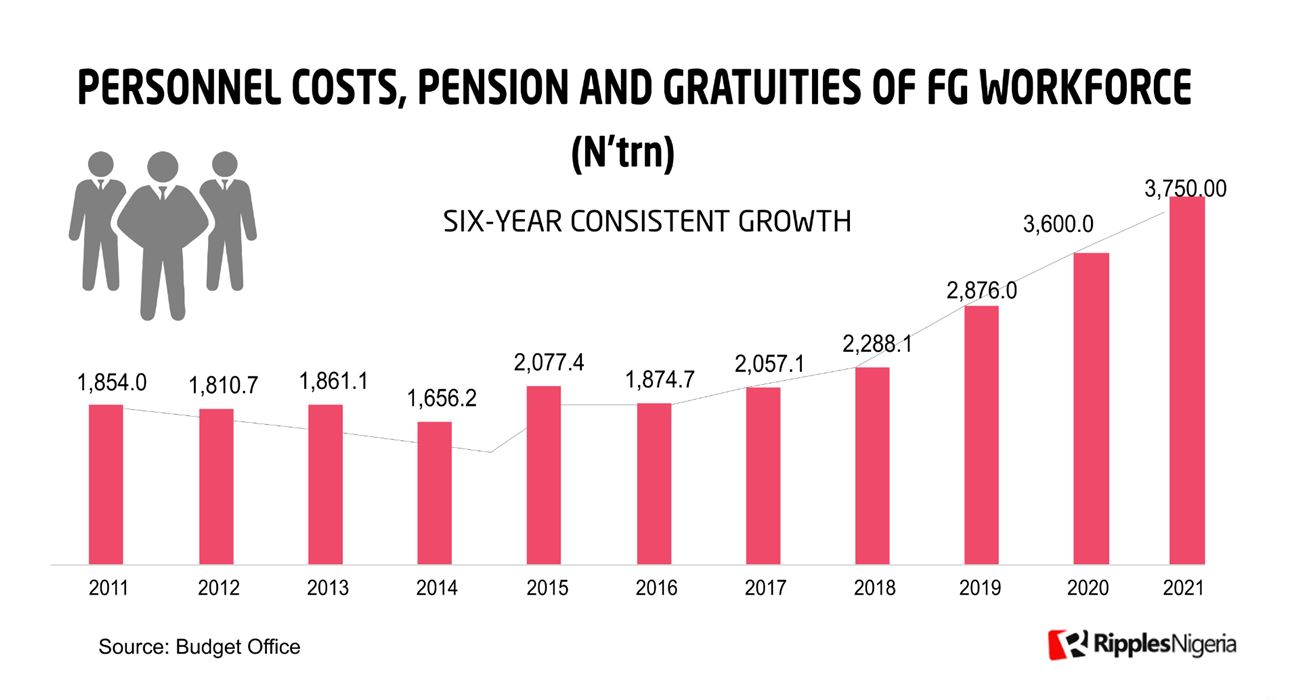 Sustaining Federal Government workforce has cost the country over N25 trillion in 11 years according to data from the budget office analysed by Ripples Nigeria.

Although the figures also include pension and gratuities of the Nigerian government workforce, it represents, an increase of over 102.2 percent from N1.85 trillion in 2011, when compared to N3.75 trillion budgeted for 2021.

Despite the growth in its workforce expenses, during the 11 years, further analysis shows the federal government has never met up with its actual revenue target.

As of third quarter of 2019, the federal government also revealed it only achieved actual aggregate revenue of N 4 25 trillion which is 81percent lower than the projected amount.

A breakdown of the personnel costs for 2021 shows an increase of 23 percent from N3.05 trillion in 2020 to N3.75 trillion in 2021. This is a similar trend in six years under the present administration despite a shortfall in revenue.

Going by the available data of the federal government’s workforce as at 2018, it is reported to be about 400,000 in total, which represents about 0.2 percent of the country’s 200 million population.

Ripples Nigeria calculation shows that 0.2 percent of the entire Nigeria population will consume about one-third (27.5 percent) of the 2021 N13.6 trillion national budget.

While it is uncertain why there is an increase in the workforce budget, however, what this means is that FG personnel cost in 2021, will further cast shadows on chances that the government will be able to implement capital projects in its N13.6 trillion budgets and could mean also the level of government debt still also has some way to go.

Looking at the trend in the last 11 years from different administrations, it is expected the workforce financial burden will continue to even expand further in coming years.

But, amidst a stuttering economy, how long can Nigeria’s dwindling economy sustain the increase?