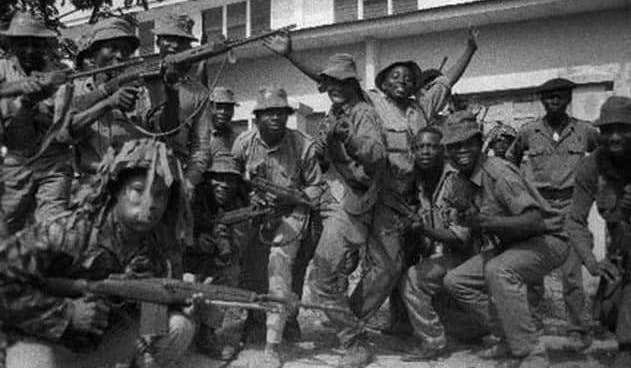 The Minister of Defence, Major General Salihi Magashi (rtd) has disclosed that 102 ex-Biafran soldiers that were granted presidential pardon have been captured for payment of gratuity and other emoluments by the Military Pension Board.

The minister said only 102 of the war veterans were captured for the payment because many of those involved are no more alive, as the war ended 51 years ago.

However, Magashi, who spoke at the ministerial briefing to flag-off the 2022 Armed Forces Remembrance Day at the Army War College, urged those with genuine complaints to come forward with their claims for consideration.

“Payment of pensions and gratuities to retired military personnel is now prompt and regular,” Magashi said.

“In line with the anti-corruption stand of the present administration, the Ministry of Defence in conjunction with the Military Pension Board conducts regular verification exercise for Military pensioners. The exercise is intended to streamline and check leakages in the system.

“It will interest you to know that the Military Pension Board just concluded the documentation of ex-Biafran service personnel totalling 102 who were pardoned by Mr President.

“The Ministry would continue to engage the pensioners through relevant organs like the Nigerian Legion, the Veteran Affairs Division and the Military Pension Board to ensure that Government obligations to them are met.”

Speaking on the importance of the Armed Forces Day Celebration, the Minister said the occasion is organised annually by the Ministry to honour fallen heroes who laid down their lives in service to humanity during the First and Second World Wars, the Nigerian Civil War, Peace Support Operations and various Internal Security Operations, particularly the current war against terrorism that is threatening the corporate existence of the country.

“As we remember our fallen heroes, we also appreciate the challenges being faced by the loved ones they left behind, and who have indelible loving memories of their departed breadwinners in their hearts. The Armed Forces Remembrance Day Celebration helps to reassure the families and relations of the fallen combatants that the nation will continue to be with them in paying respect to their departed relations.

“The celebration re-affirms the fact that their death was not in vain. It is also an avenue to encourage and appreciate Service personnel for their invaluable sacrifice to our fatherland.

“The celebration will further allow us to reflect on the sacrifices made in the current war against insurgency by our Service personnel in maintaining national peace and security,” he added.

Furthermore, he said, “The Armed Forces Remembrance Day Celebration 2022 is significant at this moment when the military is working relentlessly to motivate its force and enhance the will of our troops to fight and overcome the various security challenges in the country.

“Currently, members of the Armed Forces are more determined now than ever to confront and end the menace of terrorism in the North East Region and other security challenges facing our great country, Nigeria.

“This is evident in the ongoing mass surrendering of Boko Haram fighters in the region and successes being recorded by our gallant military personnel against bandits in the North West particularly in Zamfara and Katsina States.”

Actor Chiwetalu Agu speaks after release from DSS custody, says Nigeria has nothing to offer Igbos