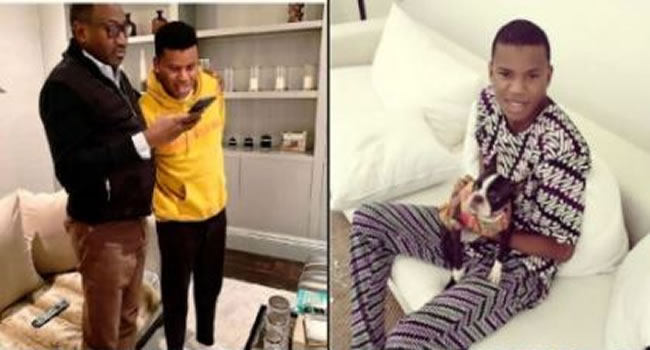 A Nigerian lady identified as Anastacia Michael has expressed her desire to enter into a relationship with billionaire Femi Otedola’s only son, Akinfenwa Otedola.

The young lady revealed that she is prepared to love the 21-year-old heir despite his medical condition.

Akinfenwa Otedola is an autistic patient, but, his father and siblings have continued to show him off on social media.

On Wednesday, the young lady, Anastacia took to social media to reveal she is interested in settling with the heir.

“I have grown to love Fewa Otedola so much.
His cuteness, innocence, simplicity, in fact, everything about this dude drives me crazy.

I will love to spend the rest of my life with Fewaluv regardless of his Autism condition. whenever, I see him I don’t see his condition, but the genuine love I have for him, and I AM WILLING TO MARRY FEWA OTEDOLA, He has stolen my heart.
Happy birthday hearty my heart beats only for you.”

Akinfenwa is the only son and last child of the business magnate, Femi Otedola.

A couple of years ago, Akinfenwa’s immediate elder sister, Temi Otedola spoke out about his medical condition.

Singer, Waje, narrates how her daughter influenced her to stop drinking alcohol