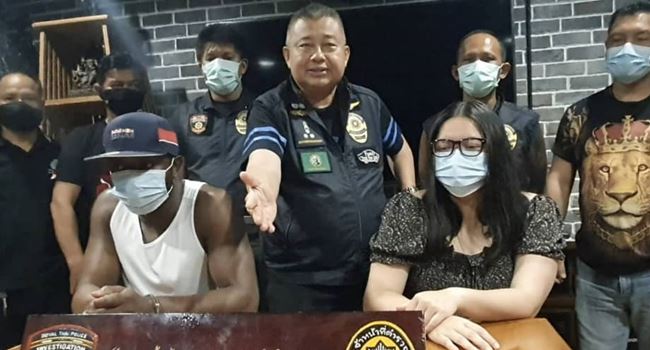 For alleged drug dealings, a Nigerian man and his girlfriend have been arrested in Thailand in its Northern Pattaya by the Region 2 Narcotics Suppression Division Team last week, local media reports.

The duo, Michael ‘Marc’ Ikenna, 36, and his girlfriend, Ms. Nantana Chiewpanit, 25, were accused of selling cocaine to an undercover operative for 4,000 baht per gram and as a result, face serving up to five years in a Thai prison.

The police team made the arrest following a tipoff that the duo were allegedly selling cocaine in the Pattaya and Bangkok area of the country.

The sales of illegal drugs were reportedly arranged through a Tanzanian female known as “Nadia” who is believed to be on a four-year visa overstay while operating within a comprehensive criminal drug-selling network in Bangkok.

Read also: Singaporean woman faces death by firing squad in China after drugs were found in goods she transported for Nigerian man

Mr. Ikenna reportedly told Region 2 police he had arrived in Thailand six months ago and started to sell narcotics after meeting “Nadia” and her accomplices. He was also on a visa overstay according to law enforcement officers.

He and his girlfriend have reportedly admitted the charges and he would likely be deported to Nigeria after his sentence is served.

Superintendent Dullapat Taechaponyasin of the Region 2 police said they are continuing their investigation to hunt for more suspects, including Nadia and her accomplice, another foreign national who lives in Bangkok known as Mr. Bryan, whose nationality was not immediately made clear.