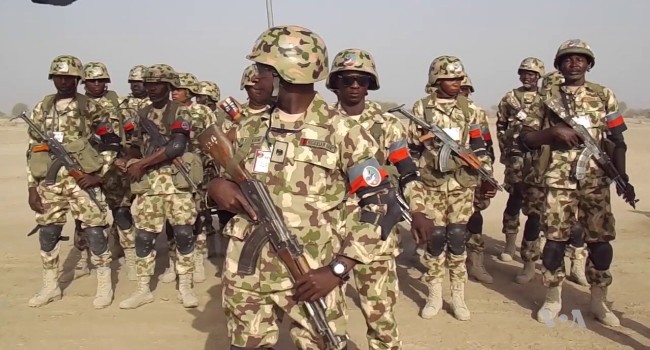 Reports from the military and residents on Thursday have confirmed that Nigerian troops have recaptured a major town from the Boko Haram terrorists.

Several residents were forced to flee following attacks by Islamic State West Africa Province in December while the army was overran.

Kukasheka explained that the troops under the operation Lafiya Dole also gained control of Zare; Gudumbali, Kukawa and Cross Kauwa.

“The Special Forces commenced clearance operations on 28th December, 2018; where they cleared Zare, Gudumbali, Kukawa and Cross Kauwa without any resistance from suspected terrorists.

“However, at Cross Kauwa, the unfortunate ISWAP terrorists made a costly mistake of raising their ugly heads. In professional fashion the troops exploited the situation, decisively neutralized the insurgents and captured some equipment.

“Though some of the terrorists attempted to infiltrate troops’ camp at Monguno, the gallant troops lured them, neutralized many of them and recovered some arms and ammunition,” he narrated.

A resident explained that the soldiers gained access to Baga without any resistance from the terrorists at about 5:30pm yesterday while adding that the terrorists had fled having heard the military was planning to launch a massive attack.