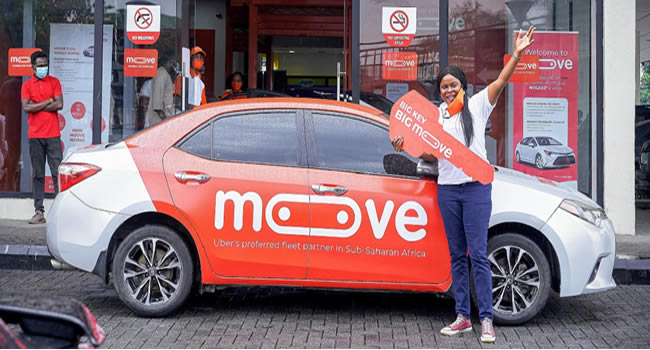 A Nigerian mobility fintech startup, Moove, has announced expansion out of Africa to secure footprint in India.

Ladi Delano, co-founder, and co-CEO at Moove, confirmed the first global expansion outside Africa in a media statement seen by Ripples Nigeria on Wednesday.

Moove, which is reputed as the world’s first mobility fintech, is Uber’s largest vehicle supply partner in EMEA.

Delano expressed her excitement while extolling Uber for its role in making the launch a success.

“We’re excited to be expanding our revenue-based vehicle financing model to enable the sustainable creation of jobs across the country, where there are some of the lowest vehicle ownership rates in the world, in part because of the lack of access to credit.

“We are delighted to be expanding our Uber partnership to solve this problem for our new customers in India,” he said.

Ripples Nigeria had earlier reported on many Moove’s acquisitions in the past and understands the latest launch in India is expected to allow thousands of drivers to return to work.

Read also:African startups to benefit from Seedstars’ $20m investment. 2 other stories and a trivia

Miriam Karthika Daniel, VP – Maps Experiences at Google, made the disclosure on Wednesday at the launching event in Delhi.

According to the company, the feature was banned roughly six years ago over security concerns in the country.

“Starting today, Street View will be available on Google Maps with fresh imagery intensity in India that is covering 150,000 kilometers (93,205 miles) of roads that’s actually been ingested into Google Maps,” said Miriam.

Miriam further noted that Google has partnered with local giants Genesys and Tech Mahindra to relaunch the service.

A UK-based social investment startup has on Wednesday announced securing $40 million in a Series B funding round led by Peter Thiel’s Valar Ventures.

Singh also noted that Singular, Global Founders Capital, Red Sea Ventures, and other angel investors participated in the series B funding round.

Shares bills itself as a social investment platform that gives users access to the stock market and improves the investment experience.

The company said the new fund will be used to expand the market footprint and for product development.

“The next generation of investors are different, both in terms of their investment appetite and the assets they deem valuable,” says Harjas

The latest funding follows on the heels of the company’s earlier $40 million Series A round, which raises the total fund so far to $90 million in capital.

Scalable hardware or software can expand to support increasing workloads.

This capability allows computer equipment and software programs to grow over time, rather than needing to be replaced.