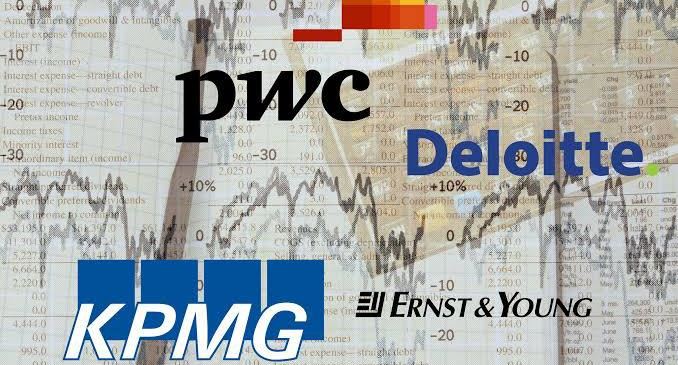 Nigerian-owned audit firms are stuck in the shadow of foreign accounting firms known as the Big Four, losing a large chunk of revenue generated in the Nigerian audit market to their foreign counterparts. To make a play for the industry’s proceeds, local firms must become one.

According to findings by Ripples Nigeria, over N2 billion was paid into the Nigerian audit market by six of the largest Nigerian companies in nine months last year 2020 – none of the fund went to Nigerian-owned audit firms, rather, the Big Four were the beneficiaries.

The Big Four consist of PricewaterhouseCoopers (PwC), Deloitte, Ernst & Young, and KPMG – together, they have dominated the Nigerian audit industry, creating an oligopoly system, devoid of domestic audit firms.

In the private sector, there are two audit-types; internal and external auditors, used by quoted or private companies to evaluate their accounts. The internal are employees of a company, but the external are outsourced auditors brought in to audit the accounts of companies.

This is a culture among companies listed on the NSE’s Premium and Main board, which shows locally-owned audit firms are playing second fiddle to foreign-owned firms in Nigeria’s audit market.

Findings by Ripples Nigeria showed that these companies, all of which have a market value between N400 billion to N4.02 trillion, account for the largest share of revenue grossed by the Nigerian audit industry.

In the financial statements of the companies tracked by Ripples Nigeria, only six revealed the fees it paid to auditors, while Lafarge Africa, Nestle, Airtel and Nigerian Breweries didn’t report their auditors’ remuneration in the nine months under review.

According to a Nigerian auditor, Akin Bello, he told Ripples Nigeria that local firms will continue to play second fiddle to international firms as they are not equipped to compete against PwC, Deloitte, Ernst & Young, and KPMG.

Bello said large corporations are taking their accounts to international firms because locally-owned audit firms are not adequately staffed, as most are sole-proprietorship unlike the foreign firms operating in Nigeria.

“Nigerian audit firms are not adequately staffed. They are mostly sole-proprietorship consultancy service that has only the Managing Partner and other low level staff. So they won’t be able to meet the expertise that is expected by international companies… so it will have effect on the quality of report and audit they will turn out.” Bello said such is the bane of local audit firms.

According to him, for local firms to be effective and able to compete against foreign-owned audit firms, they must merge to have a strong workforce and expertise that can withstand PwC, Deloitte, Ernst & Young, and KPMG.