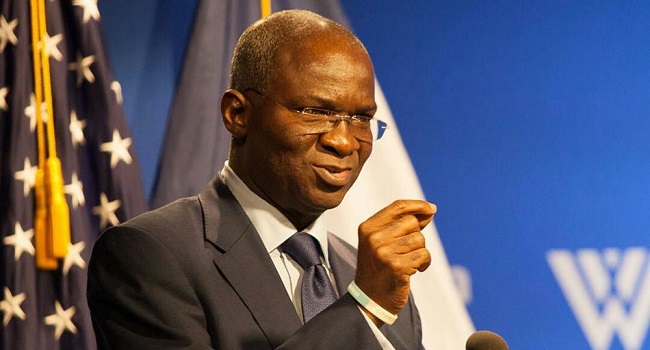 The Minister of Works and Housing, Babatunde Fashola, Wednesday described reports on the poor states of Nigerian roads as mere hype.

He also said that Nigerian roads were not as bad as they were being portrayed.

In a chat with State House correspondents at the end of the Federal Executive Council (FEC) meeting presided over by Vice President Yemi Osinbajo at the Presidential Villa, Abuja, he said: “I know that this (discussion) is going to be your headline, but the roads are not that bad.

“For me, the reports on the poor state of the roads are mere hype and nothing more.”

The minister said the paucity of funds delayed works on most of the road projects.

Fashola also disclosed that FEC approved the contract for the construction of Bida-Sachi-Nupeko road and the Nupeko-Patigi bridge across River Niger, linking Nupeko and Patigi in Niger and Kwara States at the sum of N58.488 billion.

He said the approved project would link Niger and Kwara together and facilitate connectivity from southwest to the north-central and the rest of the northern part of Nigeria.

According to him, the project was an old contract that was awarded in 2013, but was terminated for non-performance, revaluated and awarded.

The minister added: “It didn’t have a bridge then so we have added the bridge now and approved for N58.488 billion and is expected to take 30 months to complete.”