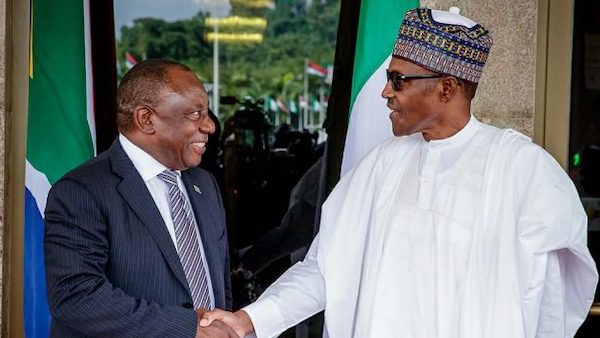 The National Association of Nigerian Students (NANS) has expressed shock at President Muhammadu Buhari’s response to the South African envoy that was sent to Nigeria over the xenophobic attacks against foreign nationals in that country.

South African President, Cyril Ramaphosa, had sent an envoy to Nigeria on Monday, apologising to the nation over the killing of Nigerians in South Africa.

President Buhari, while responding to the apologies from Ramaphosa, had pledged that the relationship between the two countries will be solidified.

Reacting to this, NANS in a statement on Tuesday by its Spokesperson, Azeez Adeyemi said it would not accept the ‘peace deal’ between the two presidents.

“Nigerian students were shocked with the response of President Buhari to the South African envoy, assuring the killers of several of Nigerians of continued relationship,” the statement said.

“Nigerians in South Africa have said they lost properties worth millions of naira and their fellow countrymen, some of whom were allegedly killed by South African policemen.

“But as cultured students, we understand that as an elder, the President will always want to foster peace especially between Africans, but in the case of South Africa, it should come with a caveat, which are as follows;

“For Peace to reign between Nigeria and South Africa, they must never lay a single finger on Nigerians in their country henceforth.

“The South African government must compensate Nigerians who have lost their properties especially during the just concluded senseless hostility against foreigners.

“South Africans must treat Nigerians the same way we treat them here in Nigeria.

“The South African President should sign a peace pact with Nigeria with a proviso, which will be ratified at the AU level.”

NANS promised to always protect Nigerians whenever occasion calls for that.

“To this end, we as student leaders want to assure Nigerians that we would be ever defensive of our people anytime the need arises.”