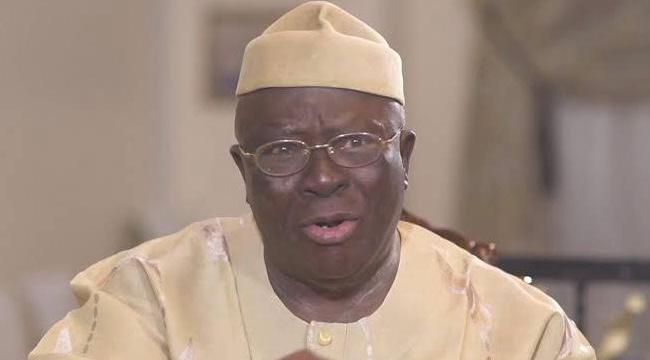 President Muhammadu Buhari would not continue to be President amid the current spate of insecurity across the country if Nigerians weren’t over-tolerant of despots.

This was the opinion of Pa Ayo Adebanjo, the Acting national leader of Pan Yoruba Socio-Political Group, Afenifere.

Adebanjo said if Buhari had self-respect, he should have resigned or stepped aside as leader of a troubled nation like Nigeria.

He made these comments during the 95th birthday ceremony of Pa Reuben Fasoranti and the dedication of a church in his honour at Iju/Ita Ogbolu in Akure North, Ondo state.

Adebanjo said President Buhari ought to have resigned over his administration’s inability to address insecurity and the dwindling economic challenges confronting the country.

“What is he presiding over? Is it over corruption, security, education? Law and order have broken down in the country for the past three years.

“It is only because Nigerians are over tolerant of despots, that is why he (Buhari) is still there.”

Adebanjo equally lashed out at the youths, saying they have failed the country too.

“The younger generation has failed the country. The country was not as bad as this when we were demonstrating self-governance.

“They want the old men to fight their cause for them. Why should people like me be in the trenches at 93 and Baba Fasoranti at 95? Where are those in their 40s and 30s?

“When we were at their age, we were on the street, at Lagos, London, everywhere and when we were in the university. What we have to say is jobbery where you can get somebody in the government to get you a job.

“You are PDP in the morning, APC in the afternoon and SDP in the evening, and they say they are young, the youth should be ashamed of themselves,” he added.

Adebanjo however expressed optimism that the country would get better, as he said “I am a Christian, so I still have hope.”

He however went on to ask why there isn’t any demonstration from Nigerians asking the Buhari government to go.

“If Nigerians are conscious of their right and they know what to do, where is the demonstration in the country that the Buhari government must go?,” asked Adebanjo.

Osinbajo departs for Uganda to represent Buhari at Museveni’s inauguration