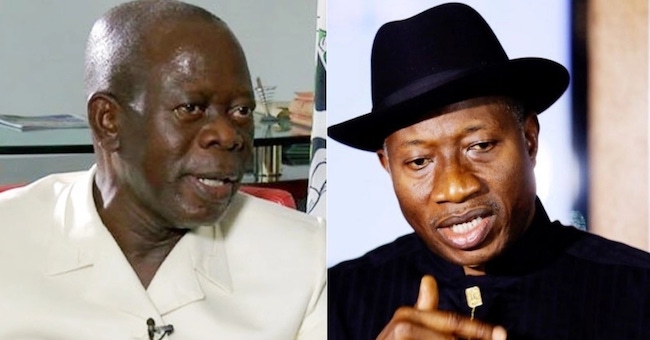 The former National Chairman of All Progressives Congress (APC), Adams Oshiomhole, on Saturday praised former President Goodluck Jonathan for leaving behind enviable legacies in the country.

The former president and Olu of Warri, Ogiame Atuwase III, were among the speakers at the event.

The ex-Edo State governor admitted that he fought Jonathan out of office because of their differences in political interests.

Oshiomhole’s remark will come as a surprise to many Nigerians as he was one of the fiercest critics of the Jonathan’s administration and he sustained his attack on the former president even after he left office in 2015.

On Saturday, he said: “You (Jonathan) left legacies even though I had cause to fight because it is politics. The legacy you have left, there is no successor who can afford to do less.

“But the beauty of a multi-party democracy is that even an angel can be defeated. Sincerely speaking, you have set a standard that none of your successors can afford to go below.

“Part of your legacies was when you launched the Almajiri School and your thought was that no Nigerian child should be left on the street and also appropriated special funds.

“These ideas are not new but what we lack is the will to transform them into practice. We don’t know who our friends are until we are no more.

“No one is appreciated until he or she leaves office.”

‘You aren’t in charge of results,’ Aisha Yesufu replies Adeyanju over remark on Obi’s 2023 chances