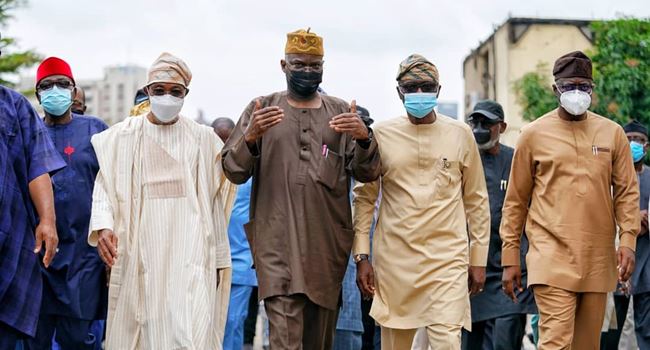 More intrigues have trailed the reported shootings in the Lekki area of Lagos state after the Minister of Works and Housing, Babatunde Fashola said he discovered a hidden camera at the Lekki tollgate on Admiralty Circle on Sunday.

He made the revelation when he led a Federal Government delegation to commiserate with Babajide Sanwo-Olu, the Lagos State Governor, over the loss of lives and destruction of properties in the state.

However, many Nigerians have reacted to the discovery, with some wondering how that was possible after the state government had said the scene had been cleaned up by the Lagos Waste Management Authority (LAWMA).

Recall that the #EndSARS protests turned bloody last week Tuesday when soldiers invaded a peaceful protest and opened fire on protesters at the Lekki Toll Gate.

This led to the violence that resulted to killings and destruction of private and public properties by angry youths in the state.

Others including Governors Kayode Fayemi, Rotimi Akeredolu, Seyi Makinde, were also on the inspection tour.

Fashola picking up the camera with the aid of a handkerchief, handed it over to Sanwo-Olu for forensic analysis and further investigation.

He said, “I think this will help with the ongoing investigations into the shootings at the Lekki Toll Gate.

“It requires forensic analysis and could be used in the investigations to unravel the mystery surrounding the shootings at the Toll Gate, I believe.”

He further pointed out that the camera must have been planted by some subversive elements prior to the reported shootings for ulterior motives.

Related Topics:FasholaLekki Tollgate
Up Next