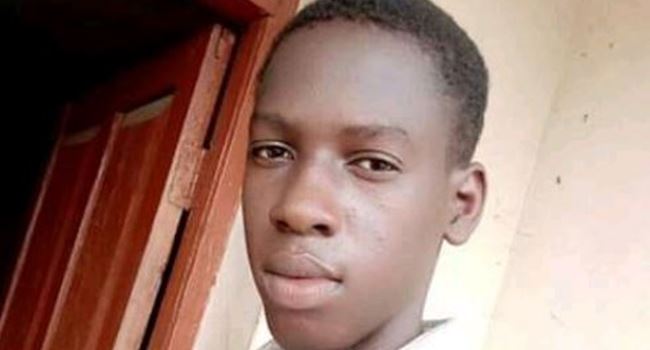 Nigerians have reacted angrily on social media condemning the reported death of an intern reporter with Gboah TV, Pelumi Onifade in the custody of the Lagos State Task Force.

Onifade was alleged to have been arrested by police officers attached to the task force while he was covering the looting of the Lagos State Agric warehouse in the Agege area of the state.

Onifade, a 200-level student of the department of history, Tai Solarin University of Education, Ijagun, Ogun State, was an intern with Gboah TV, an online television, before his alleged arrest.

The young reporter was reportedly taken away by the task force on October 24, despite wearing a jacket showing he was working as a reporter.

He was said to have been later found dead.

Confirming the death of the reporter, the management of the online broadcast station, said in a statement that “It has been confirmed that the Gboah TV staff ‘Onifade Pelumi’, arrested by the Lagos State Task Force at the Ministry of Agriculture, Abbattoir, Agege is dead.”

The statement further said that: “The Police are currently investigating the matter and have assured the management, the family and community that the investigation will be thorough and swift.

“Onifade Pelumi died while covering the scenes at the site of the palliative storage centre. He will be deeply missed!

“Further details will be released upon completion of the investigation by Police Force.”

Nigerians, including prominent activists and celebrities, have however taken to Twitter to vent their anger over his death and calling for justice.

Activist Aisha Yesufu, Comedian Mr. Macaroni, Reno Omokri, among many others, lamented the death of the young reporter, asking for the perpetrators to be fished out.

Mr. Macaroni tweeted: “Pelumi Onifade was 20 years old!!! We have lost another promising Nigerian Youth full of potentials due to recklessness and lack of value for human lives.
Nobody has been held accountable till this very moment. How safe are we in Nigeria?? #JusticeforPelumi.

A former presidential aide, Reno Omokri, added his voice when he tweeted: “Lagos State Task Force must account for the life of Pelumi Onifade. Nigerians have no confidence in the @PoliceNG to investigate this. I call on Governor @JideSanwaolu to set up a panel to investigate his death or extended the Lekki Panel to cover this. #JusticeforPelumi #EndSARS

On her part, Yesufu, the co-covener of the Bring Back Our Girls movement (BBOG), tweeted: “20 Year-Old Journalist of Gboah TV, Pelumi Onifade Reportedly Killed By task force and they withheld the news of his demise from his Family Members until his dead body was found at ikorodu mortuary. RIP Pelumi ?#JusticeforPelumi

See reactions of other Nigerians:

INEC and the return of Mr. Inconclusive