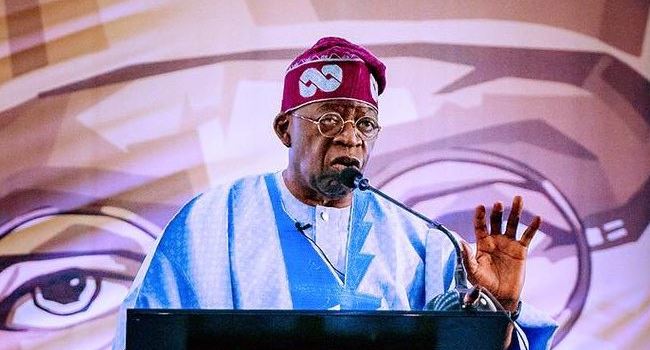 Many Nigerian have taken to social media platforms, especially Twitter, to react to call made by national leader of the All Progressives Congress (APC), Bola Tinubu, on Monday, urging the Federal Government to recruit at least 50 million youths into the Nigerian Army to boost the nation’s fight against terrorism, banditry, and all forms of internal and external security threats.

Speaking at the 12th colloquium to mark his 69th birthday in Kano State, Tinubu, who was also a former governor of Lagos State, said the nation was under-policed while competing with armed robbers and bandits, urging the government to recruit youths who were unemployed.

While reacting to recent statistics by the National Bureau of Statistics (NBS) that over 23 million Nigerians were jobless, Tinubu urged the government to create jobs for youths in the agricultural value chain.

He said, “Don’t talk about illiteracy, anybody who can hold a gun, who can handle a gun, who can cock and shoot is technically competent to repair a tractor in the farm.”

The colloquium held in Kano, was themed, ‘Our Common Bond, Our Common Wealth: The Imperative Of National Cohesion For Growth And Prosperity’, and was virtually attended by the President, Muhammadu Buhari, who chaired the occasion and restated the essence of a “One Nigeria”.

The colloquium was also virtually attended by the Vice-President, Yemi Osinbajo; House of Representatives Speaker, Femi Gbajabiamila; Senate President, Ahmad Lawan; amongst others, whose itineraries were disrupted by poor weather from the Abuja airport to the Kano airport.

Reacting, some Nigerians welcomes the idea, while some said it could to more problems as there would be arms in the hands of many more Nigerians, which may be uncontrollable.

See some reactions below:

I will only have issues with Tinubu's "50 million man army" if they are from one region. And as it is, no single region have that population.

There will be more guns in people's hands with that idea.

The quicker the breakup, while still armed.

Tinubu may mean different things to different people but to me he is an institution.
No politician alive today in Nigeria can match his resourcefulness & profundity.
By observing his 12th bd colloqium in Kano, he has further proven his extraordinary varsatiliy #JagabanColloquium

Is there no any young vibrant politician? Why recycling these old cargoes that have thrown d country into a dungeon? Tinubu ❌ Atiku❌

Let them recruit Şeyi Tinubu first and others will follow. 50 Million of our young people being led to slaughter and this is the man that wants to be President and his own grand solution to fighting terrorist. Fantastic!!!

When we're not in civil war when every Dick and Harry was taken from under their fathers' roof to war front, what the heck does Tinubu think we need 50m army for?
At least he has shown he has no idea, PR could not even help, you're free to curse anyone that supports his ambition