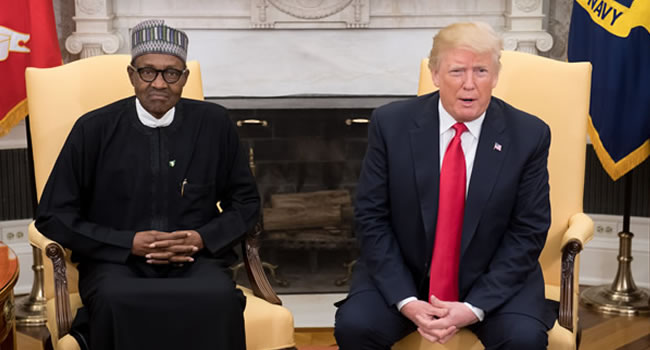 Many Nigerians have reacting to an alleged comment made by the United States of America president, Donald Trump about his Nigerian counterpart, Muhammadu Buhari.

Revelations emerged on Monday that Trump may have regretted the meeting between both men which held earlier in the year.

According to a Financial Times report, President Trump described the meeting as lifeless and would not want to meet anyone like that again.

The revelation is coming on the heels of an impending meeting between Trump and the Kenyan President, Uhuru Kenyatta on Monday.

According to the Financial Times report, Trump had told his three aides that he never wanted to meet with someone as lifeless as the Nigerian President.

“The first meeting, with Nigeria’s ailing 75-year-old Muhammadu Buhari in April, ended with the US president telling aides he never wanted to meet someone so lifeless again, according to three people familiar with the matter”, the report said.

It would be recalled that supporters of President Buhari had hailed the meeting, insisting that the American leader praised him for his integrity and incorruptible posture.

READ ALSO: Nigeria is like a car whose engine has knocked —Obi

On his part, President Buhari had said that his meeting with Trump was sweet and would yield results on economy, security, anti-corruption.

However, it was reported that Trump told Buhari that he should protect Nigerians against the spate of killings in the country.

“We are deeply concerned by the religious violence in Nigeria, including the burning of churches and killing of Christians. We encourage Nigeria and the federal, local, and state governments to do everything to immediately secure the communities and protect innocent civilians, including Muslims and Christians”, Trumps reportedly said.

Many Nigerians have been reacting to the report on various social media platforms, with the debate divided for and against Buhari.

On his part, SKC Ogbonnia, a Presidential Aspirant of the ruling All Progressives Congress (APC) simply said, “I Told You So: The World Does Not Want Buhari Back”