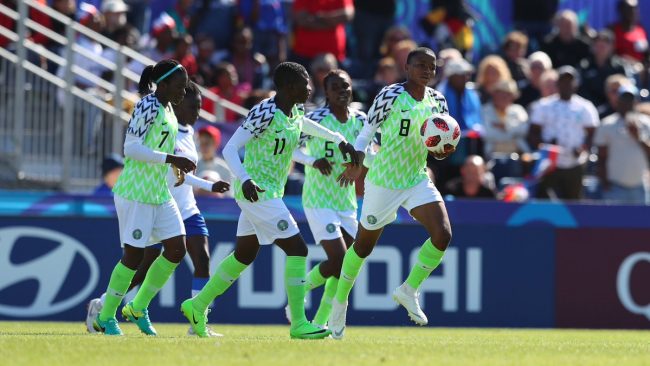 Nigeria U-20 women’s team, the Falconets have discovered their group stage foes ahead of the 2022 FIFA U-20 Women’s World Cup.

The Nigerian ladies were drawn in Group C alongside France, Canada and South Korea for this year’s tournament billed to hold in Costa Rica.

The draw was held on Thursday at the Teatro Nacional de Costa Rica in San José, with the competition billed to run from 10th to 28th August in the cities of Alajuela and San Jose.

The 16 qualified teams were seeded based on their performances in the five previous World Cups.

Also, five bonus points were added to each of the confederation’s current champions that won the respective qualifying tournament.

Africa’s other representative Ghana are in Group D and will take on the United States, Japan and Netherlands.

At the 2018 in France, the Falconets crashed out in the quarter-finals after losing 2-1 to finalists Spain.

Their best achievement at the U-20 Women’s World Cup was at the 2010 and 2014 editions where they finished as runners-up.

At the 2014 tournament, Asisat Oshoala emerged top scorer with seven goals and won the Most Valuable Player award.

To qualify for this year’s tournament, the Falconets hammered Central African Republic 11-0 on aggregate in the second round.

In the third round, they beat Congo 4-0 away and had a walkover in the return leg in Nigeria.

They faced Cameroon in the fourth stage of the qualifiers and after a goalless first Leg in Yaoundé, the Falconets won the second leg 3-0.

And in the fifth and final round, they overcame Senegal 7-2 on aggregate.

Costa Rica would have hosted the 2020 edition but it was cancelled due to the COVID-19 pandemic. It will be the second time that Costa Rica host a FIFA tournament after the 2014 FIFA U-17 Women’s World Cup.

Costa Rica and Panama were originally selected as co-hosts of the 2020 edition on 20 December 2019, before the withdrawal of Panama leaving Costa Rica as the sole hosts.

Related Topics:falconetsWorld Cup
Up Next