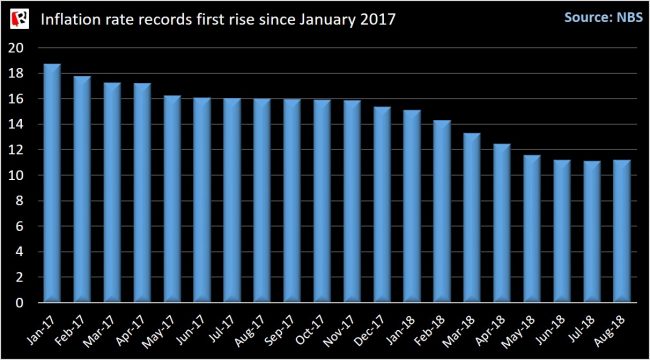 The Nigeria’s inflation rate has rebounded in August for the first time since January 2017 after recording 18 consecutive months of downward trend, according to the National Bureau of Statistics (NBS).

In the August inflation report by the statistics bureau on Friday, the nation’s Consumer Price Index (CPI), which measures inflation, rose by 0.09 percent points to 11.23 percent in August.

This implies the prices of goods and services rose at a faster rate in review month – just like June 2018 – when compared with July 2018.

In spite of the persistent decline during the period, the macroeconomic variable remained above the Central Bank of Nigeria’s (CBN) acceptable band of 6 percent to 9 percent.

The CPI measures the composite changes in the prices of consumer goods and services, such as food, transportation, and medical care, purchased by households, over a period.

The NBS said food inflation also surged to 13.16 percent YoY in August up from 12.85 percent recorded in previous month, while core inflation, which excludes agricultural produce, dropped from 10.2 percent in July to 10.0 percent in August.

The CBN had expressed fear over the possibility of a rebound in the macroeconomic indicator in the second half of 2018 as a result of increased spending ahead of the 2019 general elections.

In August, the CBN said it may consider raising its key lending rate for the first time in two years if the inflation rate worsens.

The Monetary Policy Committee (MPC) of the CBN in its July meeting had retained the Monetary Policy Rate (MPR) at record-high of 14 percent for the 11th consecutive time since 2016 to monitor the magnitude of the liquidity impact of the fiscal injection and election related expenditure.

Adeosun admits certificate is fake, says ‘I did not know’