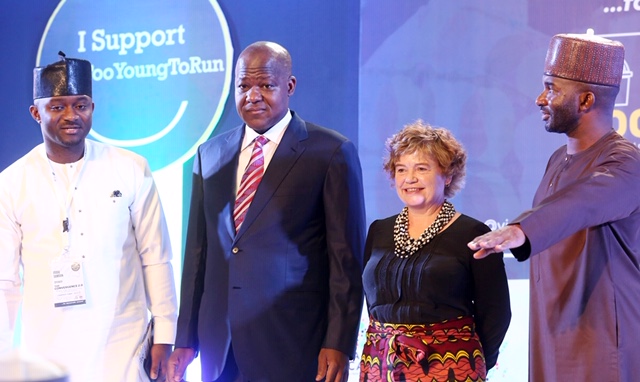 Speaker of the House of Representatives, Hon Yakubu Dogara, has charged young lawmakers to shun the arrogance of power and be prepared to stand for the truth regardless of who is for or against it, or even when the consequences are dire.

Speaking at a Conference organised by the #NotTooYoungToRun Movement for young lawmakers at both the national and state levels, he added that qualified youths who have the capacity to serve with distinction are abundant in Nigeria and though they have been kept on the sidelines since 1999, they must be disciplined and be prepared to afflict themselves in order to bring comfort to broken Nigerians.

Speaker Dogara encouraged them to stand up against the bondage of godfatherism if they are determined to make a difference in the political space for the good of all Nigerians.

He urged them to remember that they carry the burden and the promises of a generation that must not fail, that must be on the wings of discipline that produces character, without which they cannot be men and women of influence and in that case, without influence, they cannot change anything.

“Character means that you cannot be separated from your word; a quality no godfather in history has ever possessed. Character is not only that your word is your bond but that you are actually what you pretend be. While godfathers always pretend to be something other than who they really are, Leaders do not. Imagine where we will be as a nation if all these godfathers that litter the political landscape become what or who they pretend to be.

He added, “Unfortunately, the leadership model we have practiced so far is the kind of leadership that produces sycophants who are expected to serve their political godfathers and not the people. Our so called leaders have mastered the art of political witchcraft so much so that if you are independent minded, you are automatically disqualified and if for any reason you are picked, then you have to surrender your soul for them to eat in small bites until you become their worshipper.

“In the midst of this pandemic sycophancy, our so called godfathers expect us to fit in and not to stand up to be counted or make a difference. We need leaders who will lead us to build a nation and serve others not godfathers who demand that we worship and serve them rather than serve the people.”

Citing happenings at the National Assembly to further buttress his point, Hon Dogara pointed out that the Federal legislature has often charted its leadership course because the lawmakers are well aware that external interests will never find the convergence to legislate for the people or hold the Executive to account.

The Speaker said they should be reminded that true greatness only comes while serving others and not when serving themselves or godfathers, as Nigerian electorate have now become more sophisticated and increasingly aware of the power of the ballot and are now more likely to choose to reward stewardship according to the services rendered by their representatives than what obtained in the past.

He stated, “In your new calling, it is germane that you shun the arrogance of power. If you do not stay connected to the grassroots and those who have yielded their mandates to you, you will ultimately pay at the polls. The Nigerian voter is becoming increasingly aware of the power of the ballot, and they demonstrated it in some states where elections truly counted.

‘Above all, what will define you as a triumph or tragedy in this journey is like I have said, discipline because everything that has ever gone down is traceable to indiscipline.

“I have no doubt that you are all familiar with the maxim that says “power corrupts and absolute power corrupts absolutely.” If you look at our history, you will find it strewn with strong men that have abused due process, spurn the Rule of Law. Why? Power! You are all witnesses to the serial nepotistic abuses across boards – federal, state and local – of those who wield power. Will that be your legacy? Will you stand differently? To stand differently does not mean to be unreasonable, but to take firm and decisive actions that are in the interest of the people. For you, it begins with the choice of leadership in your various assemblies.”

He further said that it is in this regard that as fresh legislators, such as the youths gathered at the event, need to demonstrate acute perspicuity that you will define the kind of leadership that will be answerable to them, the representatives of the people and the people they represent, and not to some godfathers who live only for themselves.

He alluded to the case of his home state where the incumbent governor was humbled by the same people who he had arrogantly declared as irrelevant, saying,

“My home state of Bauchi is one such place where the people taught an incumbent that arrogance of power is fatal. You can imagine a situation where a Governor will refer to the votes of a whole constituency as insignificant. But in the end, it was the ‘insignificant votes’ that ended his driving desire to return to office. History is rich with examples of why some leaders and politicians failed or could not deliver as expected. It is for this reason you ought to invest in research, cross fertilisation of ideas, build consensus, and alliances, learn the art of lobbying to get your bills through.”