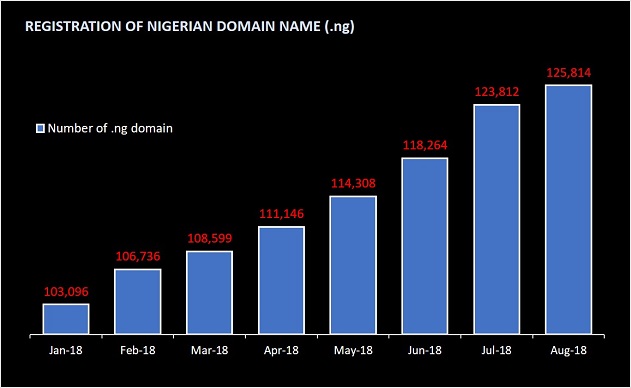 As the number of internet users kept on increasing all over the world, Nigerians have continued to show interest in the country’s domain name, ng country code Top Level Domain (ccTLD).

The development pushed the number of registration in the country’s domain name to 125,814 in August, indicating Nigerians’ renewed interest in embracing the .ng brand.

According to the latest data obtained by the Nigeria Internet Registration Association (NiRA), the registration of .ng domain rose by 22,718 units in August from 103,096 units recorded in January, representing 22 percent increase.

An analysis of the data showed that the monthly rate of growth of the country’s domain name registration rose by 4.69 percent in July, the highestincrease so far in the year but dropped to 1.62 percent in August.

A total of 37,313 units of new domain name registration were recorded between January and August, 2018, 20,557 domains were renewed, while 587 domains were transferred to other registrars, according to the data.

“The monthly rate of growth of the domain name registration is encouraging. In August 2018, there were 5,161 newly registered domain names as against the 4,274 done at the same time in 2017.

NiRA added that the efforts of its accredited registrars aimed at growing the country’s ccTLD had contributed to the increase.