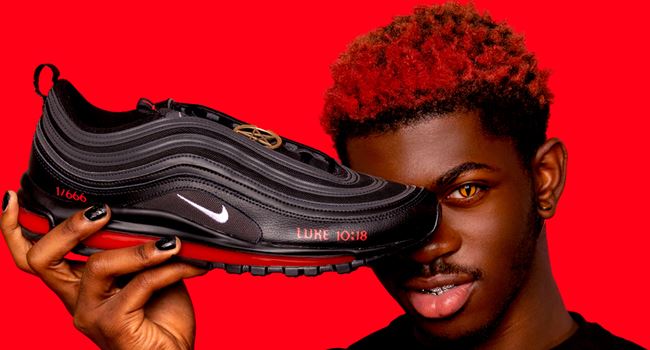 American sportswear company, Nike has sued an organization, MSCHF Product Studio Inc for allegedly infringing on and diluting their trademark with the black-and-red, devil-themed shoes, which went on sale online on Monday, March 29.

The rapper, Lil Nas X real name Montero Lamar Hill was not mentioned as a defendant in the suit.

The controversial footwear is a customized Nike Air Max 97 sneakers that contains red ink and “one drop of human blood” in the sole, according to a website describing the 666 pairs of limited edition shoes.

The back of one shoe says “MSCHF” and the other says “Lil Nas X.”

Several media outlets reported that the shoes sold out in less than one minute at a cost of $1,018 per pair on Monday, March 29.

The lawsuit argues that Nike must maintain control over its brand “by setting the record straight” about what products bear its distinctive “swoosh” logo.

“In fact, there is already evidence of significant confusion and dilution occurring in the marketplace, including calls to boycott Nike in response to the launch of MSCHF’s Satan Shoes based on the mistaken belief that Nike has authorized or approved this product,” the lawsuit says.

In a statement after the complaint was filed, Nike reiterated that it is in no way affiliated with Satan Shoes.

“We don’t have any further details to share on pending legal matters,” Nike said. “However, we can tell you we do not have a relationship with Lil Nas X or MSCHF.”

Lil Nas X tweeted about the news with a short clip from the cartoon “SpongeBob SquarePants,” in which a character says:

me at a funeral after saying we should cut the person open to see if they’re cake pic.twitter.com/m0R2Fa3dRU