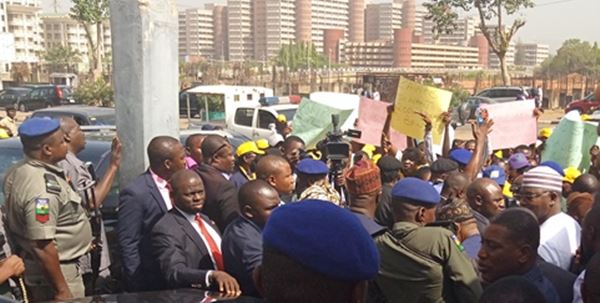 Workers of the Nigeria Postal Service (NIPOST) on Thursday protested plans by the Federal Government to stop them from collecting stamp duty.

The Federal Government is said to have planned to cede stamp duty collections to the Federal Inland Revenue Service (FIRS).

NIPOST workers, worried by the move, besieged the headquarters of the ministry of finance in protest.

Led by the leadership of the Senior Staff Association of Statutory Corporations and Government Owned Companies, the workees, for over an hour shut the premises of the ministry, not letting anyone to either go in or out of the ministry.

The protest took place at the same time the public presentation of the 2020 budget was taking place at the ministry’s main auditorium.

Consequently, guests who either wanted to enter or exit the premises of the ministry were prevented from doing so by the protesting workers.

Among the guests were the Minister of Information, Lai Mohammed; the Minister of State for Budget and Planning Clem Agba; the acting Director-General of the Securities and Exchange Commission, Mary Uduk.

The protesters refused to leave the entrance of the ministry until the Minister of Finance, Mrs Zainab Ahmed, came out and addressed them.

They said she must explain to them why they were being stopped from collecting stamp duties.

In her response, Mrs Zainab Ahmed asked them to present their matter to her through a proposal. She then pleaded with them to leave and return to her with the proposal.

The National Assembly is currenyly amending the Stamp Duty Act. The workers claimed the amendment was targeted at empowering the FIRS as the agency to collect stamp duty on electronic transactions.