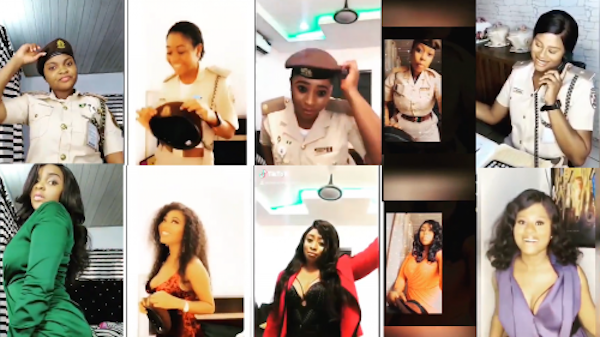 The Nigeria Immigration Service (NIS) Wednesday transferred five female officers from their base after they participated in the ”Bop Daddy challenge” initiated by Falz the Bad Guy.”

The immigration had in April queried the officers in question — Priscilla Irabor, Catherine J. Bakura, Blessing Alfred Udida, Binti I. Attabor, and Ockiya Eneni —for participating in the challenge while in uniform.

The ladies were accused of flaunting of their bodies and desecration of the Service uniform.

In the letter titled: Senior Staff Posting Order and dated May 12, 2020, Irabor was transfered from the Lagos State Command to the Nigeria Immigration Training School, Kano; Attabor from the Service Headquarters in Abuja to Yobe State Command while Eneni was moved from the Combined Expatriate Residence Permit and Aliens Card production facility to the Borno State Command.

The officers, according to the letter, are expected to relocate to their new stations within seven days.

Member of criminal gang reveals how they abducted, killed 21-year-old man in Anambra