NJC receives petitions against 37 judges, sets up panel to probe only 8 | Ripples Nigeria 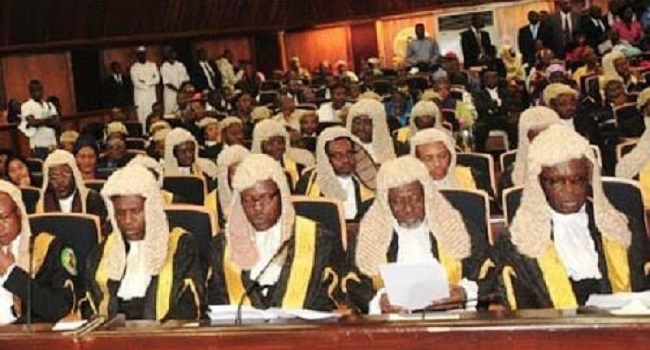 The National Judicial Council (NJC) has empaneled eight committees to investigate petitions against eight judges out of 35 petitions written against 37 judges.

The council dismissed the petitions against the rest of the other judges in the number.

In a statement on Thursday, NJC’s spokesman, Soji Oye said that the development followed the council’s deliberations on the report of its Preliminary Complaints Assessment Committee on 35 petitions written against 37 judges of the Federal and State High Courts.

The deliberation, he said, was at the council’s meeting held between Tuesday and Wednesday.

Oye mentioned the identity of the judges against whom petitions were dismissed, but kept mute on the names of the eight set down for investigation, on the grounds that disclosing their names would negatively affect the people involved.

He said, “Council at the meeting deliberated on the report of its Preliminary Complaints Assessment Committee and decided to empanel eight committees to investigate eight judicial officers from amongst the 35 petitions written against 37 judges of the Federal and State High Courts.

“The remaining petitions were summarily dismissed for obvious and manifest lack of merit, being subjudice, concerning administrative matters, or that such petitions were matters for appeal.

“Council also approved the recommendation of two committees, earlier set-up to investigate Hon. Justice Winifred I. A. Effiong of Akwa-Ibom State High Court of Justice and Hon. Justice Bello Aliyu Gusau of High of Justice, Zamfara State, which absolved them of any judicial misconduct.”

Oye also said that the NJC at the meeting also recommended four judicial officers to be appointed as justices of the Supreme Court, four as heads of High Courts, 13 for Federal, State High Courts and one Kadi, for Sharia Court of Appeal.

Other were Justice Benedict B. Kanyip (as the substantive President of the National Industrial Court of Nigeria), Justice Esther Amenaghawon Edigin(as Chief Judge of Edo State and Justice Eunice Aderonke Alade (as Chief Judge of Ondo State.

The 14 recommended for appointment as judges are to serve in the Federal and State High Courts, and Sharia Court of Appeal in Edo, Ondo, Akwa-Ibom, Kogi, Anambra, Taraba, Abia, Osun, Nasarawa and Jigawa states.

It recommended the appointment of three for Abia State High Court, two for Anambra High Court and one as Kadi for the Sharia Court of Appeal, Jigawa State.

According to Oye, all the appointed judicials are expected to be sworn-in after the approval of President Muhammadu Buhari (for the Supreme Court and Federal High Court) and the governors of the affected states, including the confirmation by the Senate and State Houses of Assembly as the case may be.