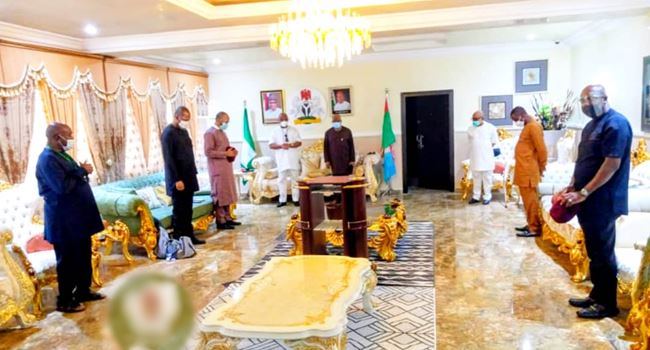 Chieftains of the ruling All Progressives Congress (APC) from the South-East on Saturday met in Owerri, Imo State capital, where they debunked claims of marginalisation of Igbo people in Nigeria.

The key leaders of the APC from the region, also at the meeting claimed that the Igbo people were currently more united than ever.

Many people from that part of Nigeria have often cried out that the region is marginalised in the country.

Some have even attributed the agitation for Biafra by some groups in the South-East as resulting from the marginalisation the people continue to allegedly suffer in Nigeria.

However, the APC chieftains maintained that there was nothing like the marginalisation of the Igbo people, adding the claim remained a mere speculation and the figment of the imagination of those who are not well informed.

After the meeting held behind closed doors, Nnamani, who is currently representing the South-East in the National Caretaker Committee of the APC, told newsmen that he led the delegation to pay a solidarity visit to the governor of Imo State, Senator Hope Uzodinma.

According to him, the delegation did not only come to wish Uzodinma, who is the only APC governor in the South-East well, but to also let him know they were impressed with what they have seen on the ground.

He said they believe “strongly that there is a lot of hope in the person Hope as the Governor of Imo State.’

Speaking, Uzodinma told newsmen that the APC government in Imo State remained the gateway to integrating Igbos into the national political and socio-economic grid as well as the policy framework of the Federal Republic of Nigeria.

“The South-East is part of Nigeria, South-East leaders exhibit all qualities and capabilities for good governance and as such believe that the APC as the ruling party in Nigeria will make the right decision at the appropriate time,” he said.

Ngige, in his address, said South-East ministers at the Federal Executive Council (FEC) had been given the region effective representation, ‘getting what is the due share for the South-East.’

He listed projects in the region both completed and ongoing as well as other benefits the South-East has been enjoying under the APC-led federal government to include: the credit empowerment Scheme, the N-power project, Home School Feeding programme, East Coast Rail project running from Lagos-Benin-Onitsha-Nnewi to Owerri.