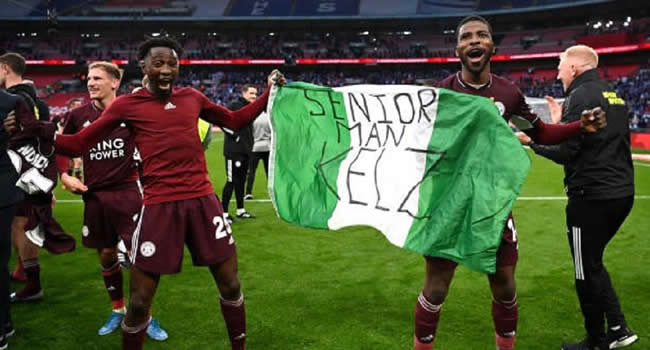 The leader of the Indigenous People of Biafra (IPOB) Nnamdi Kanu has slammed the Super Eagles duo of Kelechi Iheanacho and Wilfred Ndidi for celebrating with the Nigerian flag.

This was after Leicester City defeated Chelsea to win the FA Cup on Saturday night.

Ripples Nigeria had reported that Iheanacho led the celebrations with the Nigerian flag while his compatriot Wilfred Ndidi also joined in wrapping the flag around themselves.

Leicester City’s Youri Tielemans scored the lone goal of the march, to give Leicester City the trophy for the first time in their history with victory over Chelsea at Wembley.

The celebrations by the Nigerian players triggered commendations from social media commentators.

However, Nnamdi Kanu, in a tweet on Monday, criticised Iheanacho and Ndidi who hail from southeast Nigeria for celebrating with the Nigerian flag.

The IPOB leader described their actions as shameful and told them to emulate Spanish defender Gerard Pique who always supports calls for Catalonia’s secession from Spain.

“Gerard Pique is a World Cup winner with over 103 caps for Spain. He never turned his back against Catalonia freedom,” Kanu tweeted. “Severally, he has shown open support for Catalan freedom.

“But our Iheanacho & Ndidi with #Zoo flag? Shame!

Gbajabiamila reveals only 9% military budget is spent on equipment

Senator Garba reveals why suspended NPA MD, Bala-Usman plotted her removal from board