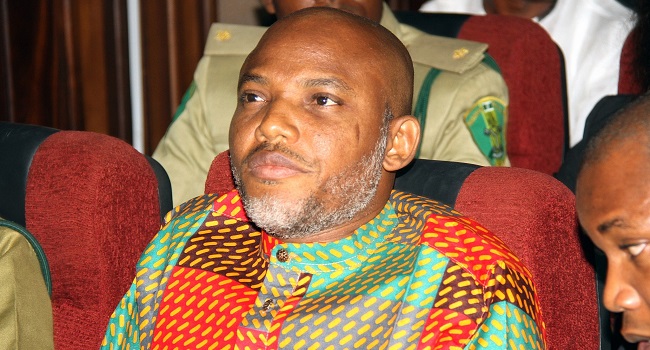 Nnamdi Kanu, leader of the separatist Indigenous People of Biafra (IPOB) movement suddenly resurfaced in Jerusalem, Israel at the Wailing Wall, after his one-year disappearance that resulted in speculations about his whereabouts. Kanu has since issued a statement through Radio Biafra in which he denounced the Nigerian state and boasted that no Nigerian court can do anything to him. Before disappearing from sight, under the cloud of the invasive Operation Python Dance in his home state of Abia, IPOB leader Nnamdi Kanu had accused the Nigerian government of trying to kill him and destroy the Biafran movement that he leads. He has now been quoted as saying: “(The) Nigerian court is a kangaroo court. I did not jump bail. I left because the court failed to protect me. I shall not be honouring the court. I cannot be tried by a court I do not recognize. Nigeria cannot jail me.”

Whatever may be the quality of Nnamdi Kanu’s grievances, he must be told in clear terms that he cannot make such claims of superiority to the state as he has done. No non-Nigerian can even say that Nigerian courts are unacceptable and yet engage in acts that could have implications for Nigeria’s sovereignty. Kanu says he escaped during the invasion of his home by Nigerian soldiers. We have condemned that invasion – its manner, style and intent. We have defended the right of indigenous peoples to ask for self-determination, under the right circumstances. But no other Nigerian, including Igbos, believes that Nnamdi Kanu is superior to the Nigerian state.

Read also: Nnamdi Kanu is like Ojukwu who fled the country after causing many deaths

He is on record as having said: “I am Nnamdi Kanu, no mortal flesh can kill me. They have not given birth to that very person. Since they didn’t want me to come to court, I shall come back to Biafra land…” If no mortal flesh can kill him, why run away then? Ple-a-se! Some other reports indicate that when Nnamdi Kanu returns, he will bring “hell”. I am not sure that is a correct public statement to make. I do not see many Nigerians who are looking forward to a promised “hell”. They are in hell already. And they are not likely to rely on the words of a man who vanished, when the Nigerian hell became too hot, but he is now bragging that he will return and lead his followers to a hotter part of hell. When and if Kanu returns, (he is probably just bluffing), he may find a smaller crowd behind him. What will he say to the many families who lost loved ones and property while he and his own family fled to safety? “I owe my survival to the state of Israel”, Kanu says. “I want to send my solidarity to @GovAyoFayose”, he purportedly added.

There may be politics tied to Nnamdi Kanu’s return. Why now, when an Igbo man, has been named by the opposition party as Atiku Abubakar’s running mate? Is anyone using Nnamdi Kanu as a curve ball to frustrate the Atiku-Obi ticket? Who dragged him out of whatever hole he crawled into, now to use him to play politics? However, by his conduct, and utterances, Kanu has watered down the potency of the revolution that he leads. He disappointed many. He has also failed to realise that while he was absent from the battle front, the dynamics of the revolution changed.

He wants to hold a Biafra referendum. The only referendum Nigerians are interested in at this moment is a referendum on the Buhari government. Nnamdi Kanu and associates should tarry a while. You can’t just jump off the train of revolution and expect to jump back, at an opportune time, from the Wailing Wall in Jerusalem, with a ticket made of spittle and a sheet of prayer requests.