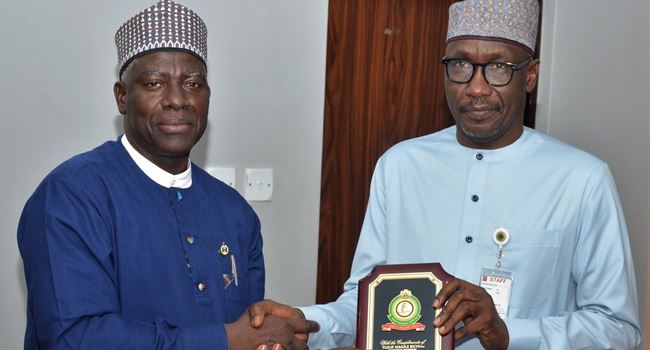 The Group Managing Director (GMD) of the Nigerian National Petroleum Corporation (NNPC), Mele Kolo Kyari, Thursday, called on the Director-General of the Department of State Services, DSS, Yusuf Magaji Bichi to help in recovering its debts long owed the corporation.

He said the call was in line with DSS mandate of protecting the nation against economic sabotage.

The GMD pointed out that the prevailing challenges of NNPC are allegedly being perpetrated by individuals and corporate bodies who allegedly reneged on business agreements relating to product allocation saying.

He said  the unwholesome practices impact negatively on the corporation’s revenue target for the country.

The development was revealed by the DSS spokesman, Peter Afunanya in a statement made available to newsmen in Abuja.

Afunanya affirmed that Kyari said this on a courtesy visit to Bichi to deepen existing interagency relations between the two organisations.

Part of the statement reads, “During the visit, the GMD stated that the Corporation has, in recent times, faced some challenges of National Security significance.

Read also: Buhari’s ministers all matter…but see why these 4 have the biggest headache

“He identified these to include the loss of revenue from product stealing, deliberate damage to product pipelines cross border smuggling of petroleum products and long indebtedness to the Corporation by persons and corporate bodies that have reneged on business agreements relating to product allocation.

“Mr Kyari lamented the impact of these on revenue generation of the country. He expressed concern that dwindling revenues affect the Government’s ability to realise its objectives.

“Consequently, he sought the assistance of the Service in containing the threats as well as recovering the debts in line with its mandate of protecting the nation against economic sabotage.

“The GMD identified the Service as a strategic stakeholder in Nigeria’s National Security management and enjoined it to continue to protect NNPC’s critical assets for the good of the nation.

“Underscoring the significance of the DSS in the National Security architecture of the country, he requested the support of the Service in the Corporation’s frontier exploration efforts in parts of the country”.

In his reaction, DGSS, according to Afunanya, promised to support the NNPC to protect the nation’s economy.

Kyari was quoted as saying, “The DSS is actually a frontline partner of the NNPC to enable government to continue to perform its fundamental objective of ensuring the security and welfare of citizens as enshrined in the constitution.”