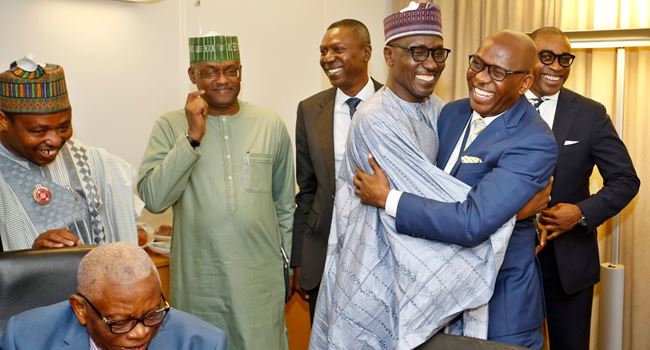 The Nigerian National Petroleum Corporation (NNPC), together with its joint venture partners in the Nigerian Liquefied Natural Gas Limited (NLNG) including Shell, Total and Eni on Friday announced the Final Investment Decision (FID) for the take-off of the NLNG-7 project.

The ambitious deal, estimated to be $10 billion, was 12 years in the making, having being marred by negotiation troubles and series of back and forths before it was delivered yesterday.

The project is anticipated to create roughly 10,000 jobs and at the same time deliver significant local content in areas as diverse as construction, cable production, scaffolding, valves, welding, furniture, medical and painting.

Tony Attah, the NLNG Managing Director, is optimistic the FID will provoke an upsurge in the company’s LNG production by 35% while improving its competitiveness in the global LNG market.

He asserted that the deal would enable expansion in the capacity of the NLNG’s six-train plant from the extant 22 Million Tonnes Per Annum (MTPA) to 30MTPA.

NLNG currently has the six-train plant with a production capacity of 22 million MTPA alongside 5 MTPA of Natural Gas Liquids (NGLs), that is Liquefied Petroleum Gas (LPG) or cooking gas, and condensate – from 3.5 billion standard cubic feet per day (Bcf/d) of natural gas intake.

The NLNG chief disclosed that the project would facilitate the award of contracts for procurement, engineering and construction activities to follow the closure of bank and Export Credit Agency financing, including the consummation of some major commercial agreements expected in early 2020.

He noted that “Train-7 is the crux of a growth agenda which will ensure the company’s position as the fifth major supplier of global LNG is maintained, increasing value to its shareholders, as well as further reducing the gas that would otherwise have been flared.

“Over 12,000 jobs will be created during the peak of construction. Trade and commercial activities within the Niger Delta region will equally receive a boost.

“The project will also support the development of local engineering and fabrication capacity in the country. Other opportunities for local content are procurement, logistics, equipment leasing, insurance, hotels, office supplies, aviation, haulage and many more.”

According to Attah, the project would upon completion boost the FG’s drive to diversify its revenue sources and earn greater income from Nigeria’s verified gas reserves put in the neighbourhood of 200 trillion cubic feet.

He went further to say that the duration of construction works after the FID would last for about five years with the first LNG rundown anticipated in 2024.

Inking the deal is a major milestone for the Mele Kyari leadership of the NNPC, which has focused on repositioning the oil and gas industry articulated in the TAPE Agenda of Transparency and Accountability and Performance Excellence.

This March, the FG and the shareholders had signed the Nigerian Content Plan (NCP) estimated to be $1 billion aimed at facilitating the actualisation of the project.

Simbi Wabote, Executive Secretary Nigerian Content Development and Monitoring Board, on his part, said the train 7 project would generate more revenue for the Federal Government and create about 10,000 direct and nearly 40,000 indirect jobs in the country.

He also observed that the project would revive the economy and cause a lot of upstream projects to spring up.

Kwara to build new secretariat on land seized from Saraki