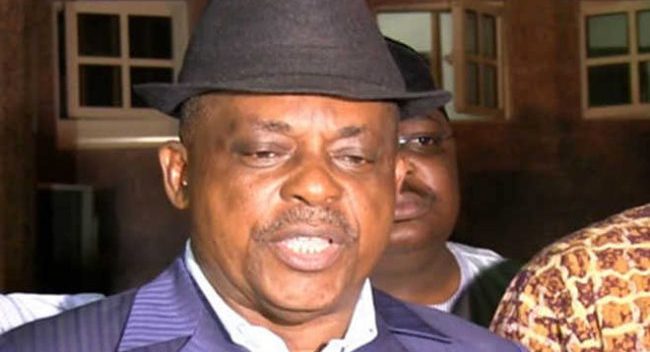 The national chairman of the Peoples Democratic Party (PDP), Prince Uche Secondus, has said that cheap blackmail allegedly being meted out to him by the All Progressives Congress (APC) led Federal Government, cannot stop the ruling party from exiting power in 2019.

In a statement by his Media Adviser, Ike Abonyi on Tuesday, Secondus said that he would ordinarily not join issues with President Muhammadu Buhari-led government on a matter already in court, but that he had to do so because he was aware of plots to tarnish his image at all cost, by an administration that uses blackmail and media persecution to defame and discredit their enemies.

Buhari government had in the list of looters released recently by the Minister of Information and Culture, Lai Mohammed, included Secondus as part of those who looted the nation’s treasury.

But in a statement on Tuesday, the PDP national chairman, challenged the government to come out with the vouchers with which he was said to have signed, adding that such signature would also be subjected to forensic analysis.

He added, “I never collected any money from anywhere. I didn’t ask anyone to collect money for me as well and I didn’t sign any voucher to collect any money. It is pure blackmail which will never work.

“If they are cooking up anything, with the aim of blackmailing me, it will fail. I know that the task of uprooting this non-performing government would be horrendous. But God is always on the side of the people.

“I can understand the frustration of a party that enjoyed enormous goodwill from Nigerians three years ago but got it squandered with its ‘nepotistic’ and insensitive administration. No amount of cheap blackmail and treachery will return the APC from the exit gate where Nigerians already pushed them to, awaiting 2019.

“The departure date for the APC has already been announced and the flight schedule would not be cancelled, because Nigerians cannot wait to see them off.”

British PM May wants Buhari, others to welcome homosexuality