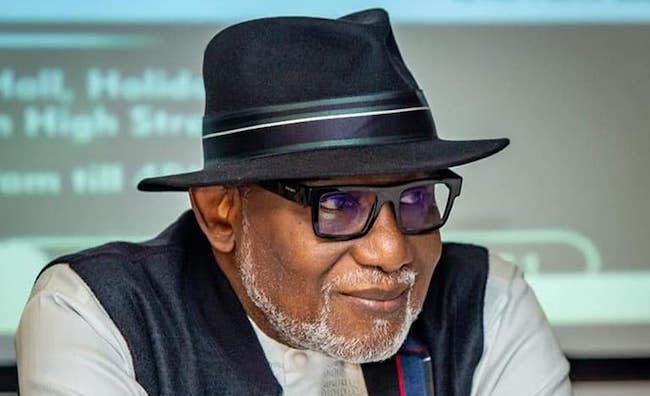 The Ondo State Government has allayed fear about the health of Governor Rotimi Akeredolu.

Reports emerged recently that Akeredolu is battling an undisclosed ailment.

In a statement issued on Tuesday by his Chief Press Secretary, Richard Olabode, the state government confirmed that the governor has been receiving treatment for some health challenges.

The statement read: “We have observed the growing anxiety about the state of health of the Ondo State Governor, Arakunrin Oluwarotimi Akeredolu, SAN, CON. The good people of the state and, by extension, other friends and well-wishers continued to express concern over the wellness of the governor, especially since yesterday.

“We are constrained to respond to these concerns and assure our people that by the grace of God, there is no cause for alarm on the governor’s state of health.

“Governor Akeredolu, just like every other mere mortal, has had some health challenges for which he has since received treatment and recuperating speedily. Since the governor is not a superhuman and the immunity his office enjoys does not extend to physical wellness or otherwise, the health issue is therefore not an unusual one.

“However, contrary to speculations and insinuations making the round, the governor though frail, is discharging his official functions.

“Mr. Governor is not faced with any life-threatening illness that would have encouraged any alleged conspiracy in his administration. He, in fact, held an executive council meeting with the Exco members till 4:00 p.m. on Wednesday, 11th January 2023 after a Security Council meeting where far-reaching decisions were taken on the escalated clashes in Ikare-Akoko.”

At Chatham, INEC rules out postponement of 2023 elections despite attack on facilities