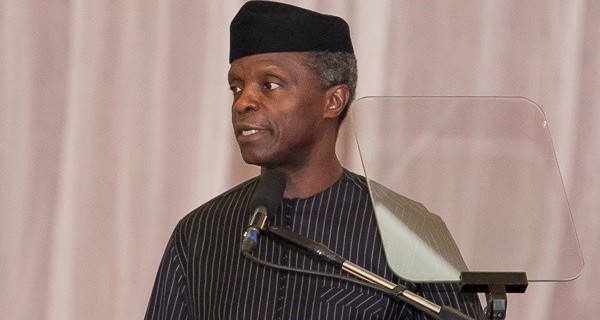 Vice-President Yemi Osinbajo on Wednesday told new officers of the Nigerian Air Force (NAF) that the job they have chosen requires them to defend the territorial integrity of the country and to put their lives on the line for the safety and welfare of millions of the citizens.

Osinbajo, who described military career as the most civic service to the nation, noted that the job goes beyond just earning salary and getting a chance to wear the coveted uniform.

The Vice-President spoke as the Reviewing Officer at the Passing out Parade of 187 new officers of NAF who were commissioned during this year’s Direct Short Service Course 28 at Base in Kaduna.

“As you already know, this profession you have chosen requires absolute discipline, loyalty and hard work. It is much more than just securing a job or earning a salary. It is more than just getting the chance to wear a coveted uniform or wield coveted weapons.

“This is the ultimate form of civic service to defend the territorial integrity of your country and to put your life on the line for the safety and welfare of millions of your country men and women. There is no nobler occupation than this one you have chosen.”

“You are passing out at a time our nation is grappling with an insurgency in the Northeast and the challenges of kidnapping and armed banditry in other parts of the country. You will, therefore, have come to terms with the fact that the days and weeks and months ahead of you will be extremely busy as you fulfill your responsibilities to the military and the nation.

“While the Armed Forces have effectively contained the territorial ambitions of the Boko Haram terrorists by substantially degrading their capacity to attack and wreak havoc, they remain intent on shedding blood and sowing fear. There is also the threat of the Islamic State of West Africa Province (ISWAP) in the Lake Chad Islands and part of Southern Borno.

“Also, more often these days, these insurgents are focusing on soft targets, opportunistic attacks on isolated military units, as well as on increasingly sophisticated propaganda aimed at making them to look more organised and lethal than they really are.”

“This ever-increasing reliance on propaganda is a reminder that this is not only a ‘battleground’ war; it is just as much an information-and-narrative war. Winning hearts and minds has always been important in military warfare; it is even more so in a century defined by information and communication technologies.

“As 21st century military officers, how you project your strength and confidence to your enemies and the world, especially using social and digital media tools, is as important as the sophistication of the conventional arms and ammunition that you wield,” Osinbajo said.

According to Osinbajo, to effectively use social and digital media tools the officers must take the time and trouble to fully understand the nature of the threats that confront the country as well as the narrative and philosophies that underlie those threats.

He hinted that President Muhammadu Buhari in collaboration with governors had been reviewing the security architecture of the country.

“This initiative involves the recruitment and training of policemen in each local government and ensuring that such new policemen remain in their local governments, working with local and traditional authorities to maintain peace and security,” he said.